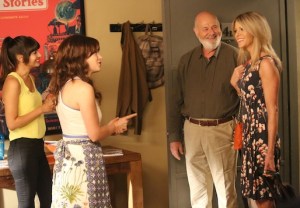 When a teenage Jessica Day flipped through her high school yearbook, little did she know that one of those pages featured her unlikely future stepmother: This week’s New Girl (Fox, Tuesday at 9/8c) introduces Ashley, the young new fiancée of Jess’ dad, Bob.

Pros: Ashley is played by It’s Always Sunny in Philadelphia‘s Kaitlin Olson, who’ll be back for more episodes later in the season. Cons: Ashley is Jess and Cece’s high school nemesis… though she doesn’t remember it that way.

“The way I was paying it was more that Cece and Jess knew her in high school. My character was a grade or two older,” Olson says with a laugh. “So I played it like I kind of remembered them, but not really, which is super insulting.”

TVLine chatted with the comedic actress about playing Rob Reiner’s trophy wife (“I jumped at the chance”) and basking in the production values of a network show. Read on for the details.

TVLINE | What can you tell us about Ashley that isn’t already out there?
I just played [her] really nice, positive and cheery, but the things I’m saying are disastrous and ridiculous… The character’s really fun because it’s sweet and positive and happy. She just happens to be a disaster.

TVLINE | The audience might not like her because Jess doesn’t like her… not because she’s a terrible person?
That’s right. She was just kind of a whore in high school. But like any great TV show or character, there’s misunderstandings going on, and you’ll get to the bottom of it.

TVLINE | What do you think Bob sees in her?
She’s a lot younger. That’s always nice. [Laughs] She’s not out to use him for anything. She genuinely loves him and thinks he’s great and thinks he has an amazing singing voice — which he does not. They’re in love. They’re truly in love.

TVLINE | You’ve done a lot of comedic work: It’s Always Sunny, Curb Your Enthusiasm, The Drew Carey Show. How did New Girl compare?
It’s always different to go and do someone else’s show when you’ve been on one for 10 years… They could not have been warmer or more lovely to me… The main difference is that our show, because we know each other so well and we’ve been doing it so long, we have everything all figured out. We move a lot more quickly… This show is a network show, so they actually bother to set up and light for you, which is very nice. [Laughs] So you end up looking good, which is an interesting concept which we do not implement in our show.

TVLINE | Michaela Watkins (Trophy Wife) also is in this episode. Does your character share any scenes with hers?
No, she has a storyline with the guys. I didn’t even get to work with the guys or see them at all so hopefully, there’ll be more interaction with [them] next time because I love those guys.

TVLINE | Any parting info you’d care to share about Ashley?
She definitely gets herself into an awkward situation. The [end of the episode] is extremely awkward. I can’t tell you what it is, because it’ll ruin the whole thing. But it’s ridiculous.