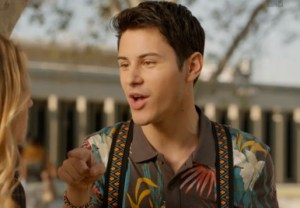 Like Season 2 itself, the drama of MTV’s Faking It (Tuesday, 10:30/9:30c) is just getting started — but Michael Willett tells TVLine that Shane is already reaching his wit’s end.

“Shane ends up confronting Karma about all of the drama she’s created,” Willett teases, but notes that tensions will settle down when “he ends up seeing another side to her.”

So what else can we expect from Shane and the Hestor High gang in Season 2? Read our Q&A with Willett below to find out:

TVLINE | We’re two episodes into the new season, and Shane is still carrying this huge Liam-Amy secret around. What effect will that have on him?
It challenges everyone’s relationship with each other. There are new trust issues between Liam and Shane, so they’ll have to patch those up. Shane’s confidence also gets challenged; he starts to think, “Maybe I don’t have all the answers. Maybe I shouldn’t be doling out this advice.” You’re going to see some cracks in Shane’s armor, for sure.

TVLINE | Speaking of secrets and drama, will Shane and Lauren’s rivalry ease up now that he knows she’s intersex?
[Laughs] Oh no, they remain frenemies. Shane hates her as much as he loves her, and they’re really similar, which is why they butt heads. They see each other as equals, so they keep each other close — right where they can see them. It’ll stay that way.

TVLINE | I feel like Shane is long overdue for a steady boyfriend. Do you agree?
Shane finds himself attracted to bright and shiny things, so [relationships] are always good in the beginning… and then he moves on. He probably goes through that cycle a few more times, I’m assuming; I don’t know exactly how the entire season is going to play out.

TVLINE | In your mind, what characteristics would Shane’s ideal boyfriend possess?
Shane would need someone who has a strong moral code, but he’d also need to be flexible. Shane is really a chameleon; he can float in a lot of different circles and situations, so I think he’d need someone who can also do that. His problem is that he gets bored so easily.

TVLINE | Asking for the fans: There’s no way we’ll get any Liam-Shane action, right?
Oh, people say that all the time, but it’s just a fan fantasy. They’re too much like brothers to ever cross those lines, or to even think about each other that way. That’s what I really like about their relationship.

TVLINE | You have some pretty huge guest stars this season. Who are you most excited for?
Well, working with Laverne Cox was so cool, I love her. She’s such a fun person to be around, always dancing and singing. It was a great time. I hope she comes back.

TVLINE | Maybe you’ll have to slip on a wig and guest-star on Orange Is the New Black.
Oh my God, that’d be awesome. I don’t know who the hell I’d play, though.

Your thoughts on Shane’s Season 2 future? Drop ’em in the comments section below.