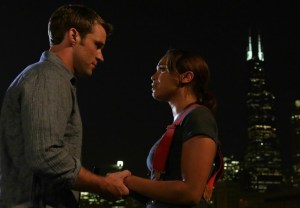 The death of a beloved friend may not be the only loss on Chicago Fire this season.

The emotional fallout from Shay’s death continues in Tuesday’s episode (NBC, 10/9c), in which Severide heads down a denial spiral that ultimately will cost him a very important relationship.

But it’s not all doom-and-gloom. Below, executive producer Matt Olmstead previews Dawson and Casey planning their future as a couple and gives us a peek at the pair’s living arrangements with new roomie, Severide.

TVLINE | Will Dawson acknowledging in the premiere that she and Shay traded places be the most overt sign of her guilt? Or will she continue to struggle with the idea that it should have been her?
She struggles with it… You have to lean on the family. You have to distract yourself with the job. When the bell rings and you go out, sometimes it’s welcome. It’s something to keep you moving. She has a strong relationship with Casey, and she has a new job to deal with, which is becoming a firefighter. In a way, she’s grateful for the distraction. It keeps her from completely falling into this void. But it’s a guilt that I don’t know that she’ll ever shake.

TVLINE | How soon is she going to start her new assignment at the other firehouse?
It’s going to happen in a couple episodes. End of [Episode] 3 she goes there, top of [Episode] 4, I believe.

TVLINE | Judging from the preview for next week’s episode, Casey finally finds the right time to propose. Can you give us a little taste of that moment?
As he articulates to her in the first episode, he hasn’t proposed yet because he doesn’t want that memory tied to any other memories. You’ve got to separate your moments a little. So he’s waited for the dust to settle down a little bit emotionally, and so it’s the right time. They’ve healed up to the extent that they can heal up and function, day to day. They’ll always carry this loss of Shay. And before she goes to her new gig, now’s the time. He does it right.

TVLINE | Is a wedding in the cards for them this season?
We’re not sure yet.

TVLINE | Casey is going to be living with two people who are in deep stages of grief. What kind of problems does that create?
As it turns out with those kind of situations, as long as there’s one person who can steer the ship, it’s better than nobody as opposed to three people spiraling out. So Casey is there as a rock for Dawson and also Severide. They were friends. They haven’t been friends on the show because of that incident in the pilot. Because of what happened to Shay… really for the first time on the show, we see these guys as the friends they used to be. He’s there for both of them.

TVLINE | I know this is a very heavy situation, but is there any opportunity for comedy in this living arrangement?
Yeah, there’s comedy. There’s absolutely comedy. In the forthcoming episodes, of course. Not right away. It’s one of the hallmarks of the show. We embrace it when we can. It was a big source of debate in the [season premiere], when Platt comes on screen or when Boden shows his [Led ZepAgain shirt]. You’re wondering, “Is this going to be inappropriate in light of the fact it’s the episode where we reveal that Shay died?” But you have to move on. At that point, I think the viewers want the humor, which is a part of the meal we prepare on the show. TVLINE | Going forward, what’s the toll on Severide and his relationship with Lindsay?
The manifestation of this grief is a guy who is like, “I don’t really care anymore. Who knows if you’re going to be here tomorrow? There’s no use worrying about things. There’s no use worrying about consequences.” So he does his job, and when he punches out, he goes and has a good time. For him, it makes perfect sense. Casey supports it as long as he comes home at night and he’s not wrapped around a tree somewhere, [basically saying] “As long as it takes for him to get this out of his system is fine with me.” Other people are becoming worried about it. Is this a sustained behavior that’s bad for him? And also, is he just avoiding the loss of Shay?… It’s this boisterous behavior that’s somewhat familiar to Severide as the tomcat on the town at night, but it’s slightly hollow because he’s just trying to outpace this grief that even he acknowledges that he hasn’t dealt with yet.

TVLINE | Is he going to ruin his relationship with Lindsay by doing that?
For the time being, he’s going to do a very good job of ruining that relationship. They’re cut from the same cloth, which is why they came together, but there’s also another side of that, which is he’s not going to be able to run a game on a person like that. She knows, and is sympathetic to, what he’s going through. But she’s not going to be sitting at a table and he shows up late, drunk. She’s not that kind of girl. She’s there as a friend.

TVLINE | Mills’ life appears to be in jeopardy next week. How dangerous is that situation? There’s not going to be another death so soon, is there?
In the room, we were talking about how in the season finale collapse, there were one-and-a-half tragedies or deaths, Shay being the one, [and the half] being Mills because he suffers an injury that makes him reevaluate whether or not he can continue doing the job. He’s faced with a very real injury from that collapse that’s going to impede, if not prevent, him from doing squad.

TVLINE | Are there any lasting or surprising effects from Shay’s death for the other characters?
This whole Molly’s 2 thing takes on a life of its own. That’s a storyline that we sustain through Episode 10, with fits and starts and limited success, involving Cruz and Mouch, who were kind of late to the party on Molly’s 1. But… in keeping with Herrmann’s business acumen, which is not always the best, that blows up in their face a little bit.