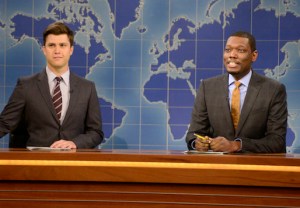 Saturday Night Live writer/onetime Daily Show correspondent Michael Che this week made his debut as coanchor of the NBC sketch series’ “Weekend Update” segment, alongside second-year Updater Colin Jost. What was your first impression of the new twosome?

As Update got underway amid a sleek new set, changed-up graphics and (I believe?) more stylish-than-usual wardrobes, Che stumbled on his very first line, but enjoyed relatively smooth sailing beyond that. Soon into the segment, he was joined by Cecily Strong’s “Girl You Wish You Hadn’t Started a Conversation With at a Party” — to show there’s no bad blood, or to not “reunite” her visually with Jost? Later, it was Che’s job to jaw with SNL newcomer Pete Davidson, who made an extremely solid first impression with a rousing bit about… well, the things people do for money/boat fuel.

I’d note that Che very much looks the part of a polished local newscaster, which helps sell the Update premise. And were there any concerns about him being a bit modulated/stiff during his first time out, they were perhaps set aside when he came to life and truly shined during the closing “Cheer Up, President Obama!” bit — certainly more than the plasticine Jost did.

It’s merely their first night at a Weekend Update duo, but go on and share your own first impression of the Jost/Che combo.