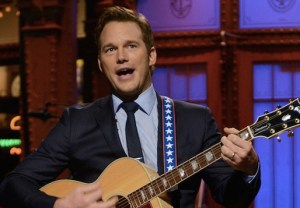 We count him among the Guardians of the Galaxy (and as the nation’s newest box-office titan, to boot), but is Chris Pratt a master of the sketch-comedy format?

It’s not the easiest question to answer, honestly. The Parks and Recreation funnyman’s maiden voyage as host of Saturday Night Live (for the show’s Season 40 premiere) got off to a rocky start in the writing department — with a thuddingly unfunny cold open about the NFL’s domestic-violence crisis and then a monologue built around a barely amusing acoustic ditty and weak jokes such as Pratt noting his weight-loss plan was the “‘Hey, fat-ass, get into shape so you can be in my movie!’ diet.”

The show perked up toward the midway point, however, with a fairly clever pre-taped piece about Marvel’s ability to turn even the lamest story into box-office gold — as well as a “Weekend Update” that went 3-for-3 in the commentator category (even if co-host Colin Jost continues to exhibit all the pizazz and energy of damp cardboard).

Below, my picks for the week’s best and worst sketches. (Also, side note: Was anybody in America asking for an encore of the “Animal Hospital” sketch? I didn’t think so.)

BEST: Pete Davidson’s Musings on “What Young Guys Would Do for $1 Million”
Brand new featured player Pete Davidson made his first SNL appearance a very memorable one, killing it with a “Weekend Update” riff on high-school and twentysomething fellas throwing out the question, “How much money would you go down on a guy for?” Davidson’s pragmatic approach — twice a year is totally OK: once for an awesome summer, the other time to help fund the family’s holiday season — had me howling. And his bottom line — “If you won’t go down on a guy for $1 million, you don’t care about your family” — was punctuated with a wry smile that I hope we’ll see plenty more of in the weeks to come.

BEST: Leslie Jones’ “Single Ladies” Monologue
Jones may not yet be in the opening credits, but her second appearance as Weekend Update’s relationship expert did not represent a sophomore slump. What began as an ode to living solo — “if you’ve got ION channel, [The Ghost Whisperer] is always on” — got darker and more manic with each passing second. By the times Jones hollered out a list of prospective questions for interested suitors — “Do you have any kids? THE BABY ON THE WAY COUNTS AS A KID!” — I wondered how “Weekend Update” would look with her in Jost’s chair. (Was that just me?)

BEST: Bar Flirtation
Sure, it was infantile in spots, but Bryant and Pratt spitting nasty hip-hop-inspired lyrics at each other as a form of ice-breaking seduction was pretty solid. Pratt killed it in particular as his character came to grips with demanding Bryant “Drop that ass low and shut the hell up” — and then inviting her to get freaky and (!) smoke some crack.

WORST: Old-School Sitcom
I’ve enjoyed some of Kyle Mooney and Beck Bennett’s previous digital shorts, but this one — a stilted spoof of ’80s family comedies (and their obvious “life lessons”) — raised a scary question: The show’s cast and writers have been off for almost four months, and this was the freshest idea they had?

WORST: “NFL in Crisis”
One of the more dismal cold opens in recent SNL history found Aidy Bryant as newscaster Candy Crowley interviewing Jay Pharoah’s Shannon Sharpe and Kenan Thompson’s Ray Lewis about pro football’s domestic violence crisis. And while I understood the intent that there’d be something funny about the NFL’s mouthpieces completely avoiding Crowley’s questions, not a single punch line actually landed. Thompson’s extended shtick about a child getting onto a bus was particularly interminable. Didn’t anybody on the show’s staff raise a hand and ask, “Is this really the best way to start a new season?” Uff da.

What did you think of this week’s SNL? How would you rate Pratt as a host? What was your favorite sketch? Take our poll below, then sound off in the comments!