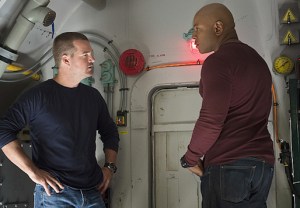 The Season 5 finale of CBS’ NCIS: Los Angeles — as it was titled — left Sam and Callen in “Deep Trouble,” locked inside a small sub rigged with explosives and headed for a target unknown, and with no way to contact their colleagues. Hetty meanwhile pulled another of her disappearing acts, and Deeks realized that three is most definitely a crowd.

TVLine invited showrunner Shane Brennan to teases the Season 6 premiere — airing Sept. 29, in its new Mondays-at-10/9c time slot – and beyond.

TVLINE | Where do things pick up with the premiere? Are you going to, like, show us that everything’s fine and dandy then do “24 Hours Earlier…,” or are you jumping right in where we left off?
We jump right in. We left Sam and Callen stuck in a drug cartel sub that was…

TVLINE | Filled to the gills with ammonium nitrate.
… and we come back right on top of it. It’s just continuous action. It’s a very, very intense opening episode, and at one point both Callen and Sam realize that in order to stop what they’ve discovered is a terrorist attack, they will have to, in fact, die. So it’s pretty full on.

TVLINE | “Assuming” here that Sam and Callen survive, what is the big question surrounding the premiere?
The big question is: How the hell are they going to get out of this? But there are a number of questions, you know. We left a bit of a mystery at the end of last season as to what was actually going on with these terrorists, including: What’s their target? And it’s a very credible target. When Sam and Callen discover that, they realize that they’ve got to stop this thing from happening, but they’re totally isolated. They’re fighting a losing battle. Meanwhile, back at Ops, the question for Granger and for Hetty is: How do we stop it the Navy from taking unilateral action to stop the terrorists?

TVLINE | Because we all know how that can shake out – “We’ll blow it up even if it means sacrificing two of our guys for the greater good.”
Exactly, and it puts them all under really intense pressure. Kensi and Deeks, meanwhile, are sort of tracking down as much information as they can, while both having their moments with Talia (returning guest star Mercedes Masohn).

TVLINE | Yeah. I’ve heard that as provocative as the finale was, it perhaps doesn’t compare to the events of the premiere. Is that true?
If you like Kensi and Deeks, and you’re intrigued by Talia, you are in for a kind of pretty full-on moment. And what’s great about it is there’s a particular moment between Kensi and Talia that is resolved beautifully, in terms of the way the characters resolve their personal relationship and the way the two of them then have fun with Deeks. There’s a lot fun for Kensi/Deeks fans in this one. There really is.

TVLINE | Outside of titillating us a bit, what larger purpose does thrusting Talia into this situation serve for the show?
It makes Kensi, particularly, focus on her relationship with Deeks. Because Talia poses some questions of her own to Kensi that makes Kensi stop and think. She also gives Kensi some, let’s call it, “unasked-for advice.”

TVLINE | Oh, so is Mercedes around for more than the premiere?
She is around for a little bit more. And there’s always a possibility she may well return deeper into the season as well.

TVLINE | The finale left Hetty’s fate in question, and it’s not the first time you’ve ended a season that way. How is it different this time around?
Well, this time we actually take it much further. Spread over the first three episodes of this season, the story takes Hetty to Washington, where she faces some very hostile questioning from a Senate committee trying to get to the truth of what happened in Afghanistan and whether Hetty was acting outside her job description, so to speak. And then we discover there’s more to this, that in fact Hetty is being targeted by someone. And that actually puts her life in danger. And someone very close to her — someone we actually don’t know anything about, really, but someone very close to her — dies as a result of all of this. We actually see Hetty reaching a point where she cannot resolve the situation herself. She can take certain things a long way up the chain of command, but eventually, they hit a wall and she can’t do any more than what she’s done.

TVLINE | Is there any kind of serialized arc going on this season? Any recurring Big Bad?
As we get deeper into the season, there is a recurring character that we’ve met a number of times over the course of this show who’s not so much a bad guy, but he’s not necessarily a good guy, either. He’s in this sort of gray area. And he makes a fairly dramatic return, and that then sparks a longer story arc that involves Callen in a pretty serious way.

TVLINE | Any dollops of character backstories during the early season?
We have someone who would be familiar with fans of NCIS – Leon Vance (played by Rocky Carroll) — popping into the show in the first three, and that should be a lot of fun. And we’ve got some really interesting stuff coming through with Callen, and relationship with Katie. Also, a mystery woman comes into the show. There are a lot of intrigues this season.

TVLINE | Does that “mystery woman” tie into one of my next questions, about perhaps a romantic interest for Callen?
Romance is definitely on the cards for Callen this season, and from an unexpected quarter.

RELATED NCIS: Los Angeles Boss Hints at Plan to Be ‘As Noisy As We Can Be’ in New Monday Time Slot

TVLINE | What about Nell and/or Eric? What’s on tap for either of them?
Well, Nell finds herself in a pretty dangerous situation pretty early on in the season, and it has to do with Hetty. As everyone who’s watched the show knows, Nell and Hetty have a special relationship.

TVLINE | Yeah, they had a couple great moments in the finale.
Well, they’re in for some surprises in the first and second episode. In the third, too, but particularly the second episode. Nell comes to Hetty’s rescue in a very interesting way. As for the relationship between Nell and Eric, we’re still exploring that in small ways, I guess, from episode to episode, but I am looking to do a little more with their relationship later this season. There’s another step or another stage, perhaps, in their relationship that we are really looking forward to exploring, and it should be a lot of fun when we take that step.

TVLINE | With the new time slot, are you looking to make the show maybe a bit noisier, to give people who aren’t familiar with it that extra reason to check it out on Monday nights?
You know, one of the great things about our show — and this goes right across the board, to the writers, the cast, the crew – is that we have always done it at 100 percent. We’ve never backed off on anything, and we’re not backing off now in any way. We are going to try to make it as noisy as we possibly can, but for fans of the show who are concerned that the show may change by going to 10 pm, they’re going to be relieved to know that it will still be the same show that they’ve loved. And anyone new who comes to the show who has the habit of watching CBS at 10 o’clock on a Monday, they’re going to be rewarded with a really intriguing show.