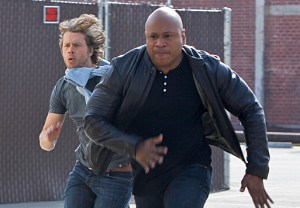 CBS’ NCIS: Los Angeles kicks off its sixth season on Sept. 29 — now airing Mondays at 10/9c, opposite ABC’s stalwart Castle (which is coming off its most watched season ever) and NBC’s buzzy The Blacklist (aka last year’s No. 1 new drama).

It’s an unenviable position to be in, christening a brand-new home — a new night, at a later hour — and without your sire/TV’s most watched drama, NCIS, opening the night. (Instead, the freshman drama Scorpion will lead into NCIS: LA.)  But the folks in LA have a plan.

“We are going to try to make the show as noisy as we possibly can,” showrunner Shane Brennan told TVLine during our Fall Preview Q&A.

Fortunately for NCIS: LA, Brennan says, “the writers, the cast and the crew have always operated at 100 percent. We’ve never backed off on anything, and we’re not backing off now in any way.” So the idea is to take what already works and kick it up a notch when possible.

“Will we have some more-familiar guest casting? Possibly,” Brennan allows. “We also hope to be able to make those great action sequences that we do so well even more intense.” (There may even be some decidedly “mature” romantic fare on tap. “If you like Kensi and Deeks and you are intrigued by Talia, you are in for a kind of full-on moment” in the premiere, the show boss teases.)

But in terms of the NCIS: LA that has thrived for five seasons, “We won’t disappoint the fans by changing it dramatically to fit the time slot,” he makes clear. “They’re going to be relieved to know that it’s the same show that they love.”

As for the procedural’s potential audience of newcomers, Brennan believes that “anyone who has the habit of watching CBS at 10 o’clock on a Monday night will be rewarded with a really intriguing show. I think we can cater to new fans because of what we’ve been doing that kept the old fans happy for five seasons.”

Want more scoop on NCIS: Los Angeles, or for any other show? Email insideline@tvline.com and your question may be answered via Matt’s Inside Line.