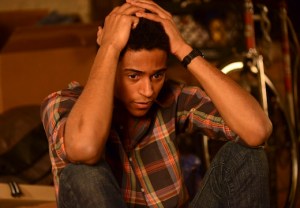 There’s nothing quite like a nighttime autumn bonfire with a group of close friends. Sharing stories, sipping vino, maybe even toasting some marshmallows.

Of course, in the pilot for ABC’s crazy-entertaining new drama How to Get Away With Murder, it’s not so much about the crackle and glow of the flames as it is the kindling being used to fuel ’em.

“Oh, don’t mind us. We’re just four law-school buddies out in the middle of the woods with some lighter fluid, a box of matches, a rolled-up rug and the dead body of our professor’s spouse. Ashes to ashes, like the old saying goes… Nothing to see here!”

Yep, in executive producer Shonda Rhimes’ latest series (created by “angry black woman” Peter Nowalk… I kid! I kid!), everybody’s a suspect — if not for the flash-forward murder that kicks off the proceedings (or the other body that winds up in a water tank atop a sorority house), then for some other barely concealed sin: Desktop adultery, possibly felonious introduction of tainted evidence, super-sneaky sexytimes to score said tainted evidence, crime-scene Clorox-ing, even the bastardization of beloved Christmas carols into murder jingles.

In other words, WTGAWM — Rated W…for WHAT?! Whoa! — is the most delicious thing to come along since the cronut (but with only one-third to one-half the calories, dependent on how much red wine you guzzled during Scandal.)

Now, I know this headline promised you a recap — but that’s pretty much an impossibility, considering the labyrinthine nature of the story. So, instead of a recitation of the facts — since you know you all watched anyway — let me try to sum up the key plot points, and then delve into the 27 or so conspiracy theories knocking around in my head. Sound good? Then gather ’round the fire!

THE SETUP | Philadelphia’s most feared (and yet most worshiped) law professor Annalise Keating (Viola Davis, owning every moment of every scene like she paid in cash) builds her classroom lessons around real murder cases — past and present — and dangles employment as a prize for the five young’uns who give her the most help on her current case. Which is how we’re introduced to the aforementioned bonfire quartet:

* Wes — fresh off the Middleton Law School waitlist, slumming it in a cheap apartment (without so much as sheets for his mattress!), but willing to let his mind wander way outside the box (and his entire body wander through doors that were closed for a damn reason). He’s neighbors with a sketchy bartender chick who gets into screaming fights with Football Star Whose Girlfriend Went Missing (more on her in a sec).

* Michaela — type A chick with dreams of being Annelise 2.0. She immediately impresses her professor by meticulously scanning a witness’ Facebook photos, observing her eyeglasses, then impersonating an insurance claims worker to unearth the damning intel that the woman is color blind. High-strung personality will likely make her a poor fit for prison, so let’s hope all her DNA on that corpse goes up in flames, yes?

* Connor — gay (or at least conveniently sexually fluid) and mega-ambitious, he’s the one Annelise warns the class that they should fear (and try to destroy); seduces an IT guy to score witness-obliterating emails related to the case of the week, then (after getting what he needs) goes ahead and plugs in his power cord (if you catch my drift) just for the fun of it.

* Laurel — timid, wounded, slightly enigmatic, she’s the one who can silently slip into a bathroom stall and spy a tender moment between a mistress murder suspect and the wife who allegedly hates her. Possible daddy issues, based on her attraction/repulsion concerning Frank, Annelise’s bearded right hand.

* Asher — not part of our central quartet of possible killers, a little bro-douche-y, a little entitled, but maybe that’s just a false first impression; he’s the one who remains unsketched at the moment. THE WEEK’S BIG CASE | Yes, all of our MVP students pitch in, but when the prosecution introduces surveillance footage of the aforementioned mistress purchasing aspirin (to which the now brain-dead victim was allergic), it’s up to Annalise to singlehandedly enact her trusty three-step defense plan of 1. Discredit the witness, 2. Introduce a new suspect, and 3. Bury the evidence with so much information that the jury is filled with nothing but doubt.

Still, if there was any doubt that Annalise will do anything to win, it’s erased when she calls her unspeakably hot, married detective lover to the stand and twists his arm to admit he’s aware of instances where cops tampered with video evidence — and that he wasn’t around the night the damning footage came into police hands because, well, ahem, he was “with a friend” — and not his cancer-stricken wife. This woman is ruthless! (I think I love her.) (Also, on a scale of gasp to hoot & holler, how did you react when Wes walked in on Det. Nate praying at Annalise’s altar, so to speak.)

THE DEAD GUY IN THE WOODS | The entire episode treats us to flash-forwards of Wes, Michaela, Connor and Laurel — three months after their first class — wrapping up a dead body at Annalise’s office, squabbling about the best way to handle it, and ultimately deciding (via coin toss) to transport it to the woods and burn it on homecoming night — when bonfires abound and it won’t seem suspicious. (This is set in the city of Philadelphia, though, so wouldn’t any bonfire in the woods seem suspicious? Just asking. Back to a total suspension of disbelief.)

Oh, and yes, as I hinted before, the corpse in question just so happens to be that of Annalise’s husband Sam (the foxy Tom Verica). More on him and his suspicious behavior in a moment, too. But was his death like something out of my favorite musical number in Chicago? Did he have it comin’? And was it really our four law students who ought to be doing the cell-block tango, or did they just somehow get stuck with cleaning up somebody else’s mess? Time (and Shonda) will tell.

THE DEAD GIRL IN THE WATER TANK | Finally, the pilot also follows the case of a missing coed — Lila Stangard — and while, yes, her boyfriend and bartender girl look like they might be involved, what do we make of the way Sam (who happened to be her professor) catches the news on TV looking… terrified? devastated? guilty? When Annalise enters the room and sees him, her parting shot, “I bet the boyfriend did it” sends a chill right through the room. Is she talking about the football star or does she suspect the man sitting next to her on the bed had his own extramarital situation going on, and that he resorted to murder to make it go away?

WHO’S ZOOMIN’ WHO? (TAKE ANOTHER LOOK, AND TELL ME BABE) | OK, so feel free to add to this list, but here’s my diagram of relationships/possible relationships/flirtations, etc.

Annalise-Sam: married
Annalise-Nate: lovers
Annalise-Wes: did you see how she put her hands on his chest when getting teary about her marital problems and trying to have a baby with Sam (and trying to convince Wes to stay silent)? And how did Viola Davis manage to be scared, emotionally broken and wicked seductive all in one scene?
Wes-Bartender Chick: Flirting — with future alcohol consumption!
Bartender Chick-Football Dude: Arguing/Passionate
Football Dude-Lila: Dating (up ’til her death, anyhow)
Lila-Sam: Possibly making whoopee during office hours?
Sam-Bonnie: We all saw how Annalise’s left-hand woman looked at Annalise’s hubby all covetous-like, yes?
Frank-Laurel: Three months in, she’s got his shirtless pic on her cellphone and is fielding middle-of-the-night calls
Connor-IT Guy: That was hot/nasty. They should see each other again before midseason, yes?

That’s a lot of connectivity — and we’re only an hour into Season 1. There’s a LOT to think about. So I’m just going to pass the mic to you.

What did you think of the How to Get Away With Murder premiere? Who actually used the “immunity idol” to bludgeon Sam — and why? Will Wes wind up as teacher’s “pet”? (Heh.) And here’s my first soon-to-be-debunked theory: Is it possible Bonnie is the one behind both Liza and Sam’s demise?

Grade the episode in our poll below, then sound off in the comments!