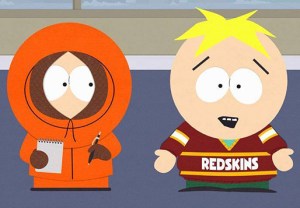 After the longest hiatus in South Park history — it’s been roughly 10 months since the last new episode — Wednesday’s season premiere made up for lost time, launching an all-out assault on… well, pretty much everything.

The half hour began innocently enough, with Cartman and his bus-stop buddies launching a startup company to secure a cushy future for themselves. And while most potential company names had already been trademarked, including the ever-elusive “Boner Forest,” one name remained conveniently up for grabs: the Washington Redskins.

So what exactly did Cartman’s new crowd-funded company do? That part’s not really important, though according to Cartman’s mission statement, the Redskins are all about finding “new and exciting ways to tell people to go f—k themselves” (an on-the-nose nod to the actual Redskins’ refusal to change their name in the face of public outcry).

But because South Park is never content to merely skew one current event, the season premiere also managed to drag Kickstarter, the NFL and even terrorist organization ISIS into its web of insanity.

Cartman’s use of the Redskins name and logo inspired team owner Dan Snyder to plead with NFL Commissioner Roger Goodell — or, more accurately, Goodell-Bot — to intervene, but wasn’t satisfied with his response… which was a literal recording of the half-assed answer Goodell recently spewed at a press conference in regards to the NFL’s current string of domestic violence scandals.

And in typical South Park fashion, things went waaaay too far — like when Snyder rallied the Redskins to destroy Kickstarter’s headquarters, complete with a Ray Rice-inspired elevator assault.

In the end, the boys crumbled under societal pressure to fold their company — they even received threats from ISIS, who got kudos for taking a moral high ground — and everything in South Park returned to normal.

(Well, as normal as they ever are.)