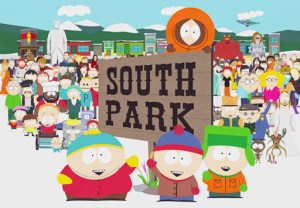 The good people of South Park, Colorado, are moving to Hulu.

During the Television Critics Association summer press tour on Saturday, it was announced that Hulu Plus will soon become the exclusive streaming provider for all 17 seasons of the Comedy Central animated series.

Additionally, all 247 episodes will stream for free on Hulu until the Season 18 premiere on Sept. 24. After that, Hulu and SouthPark.CC.com will offer a revolving selection of free episodes to non-subscribers. Once Season 18 begins, new episodes will be available next-day on Hulu and Hulu Plus.

“South Park has been one of the top 10 most popular shows of all time on the platform,” said creators Trey Parker and Matt Stone, both of whom made surprise appearances at Saturday’s Hulu panel. “We’re thrilled to offer the series to fans in its entirely. This is a natural partnership for us.”