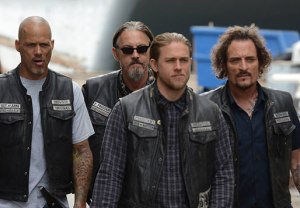 The Sons of Anarchy aren’t letting anyone cross them in their final season, a point driven home quite clearly by Tuesday’s episode.

This week, SAMCRO eliminated one enemy but created another, Gemma overstepped her boundaries (what else is new?), while Juice… oh, poor Juice.

Read on for a rundown of “Playing With Monsters”:

BROTHERLY LOVE? | To prove that his recent work with the sheriff’s department won’t prevent him from helping Juice, Unser agrees to assist Juice with a major favor: scoring him some face time with a member of SAMCRO. In return, Juice will cough up any intel he has on Tara’s murder — “intel” here meaning “a series of lies to cover his own butt.” Unser manages to get Juice face-to-face with Chibs, under the guise of Chibs meeting with his parole officer. Although Juice practically begs for a way to get back into SAMCRO’s good graces, Chibs remains as steely as ever in front of his estranged brother. His proposed solution for Juice? “If I were you, I’d get that gun, put it in my mouth and pull the trigger.” Of all the things in store for Juice this season, it seems SAMCRO’s forgiveness will not be one of them.

In return for Unser’s goodwill, Juice tells Unser to pursue the Chinese as prime suspects in Tara’s murder — something that SAMCRO isn’t pleased to hear about via Sheriff Jarry. But when Jarry and Chibs take an immediate liking to each other, Chibs catches up with the sheriff later that night and pays her a hefty sum to quit pursuing Juice and the Chinese trail. Jarry promises she’ll do her best to keep things quiet, and if I’m not mistaken, a flurry of sparks flies between the pair as they bond over battle scars. Juice, meanwhile, is taken to a motel by Wendy and Unser, who try to convince him his new digs are merely temporary.

REBELS WITH A CAUSE | SAMCRO’s biggest obstacle throughout the hour is August Marks, whose partnership with SAMCRO begins to crumble when he and Jax don’t see eye-to-eye. Instead, Jax & Co. meet with One-Niners leader Tyler, in order to ensure that the purple gang will remain loyal to SAMCRO moving forward. In exchange for his gang’s loyalty, Tyler has Jax and his men kill a handful of rebellious One-Niners who are planning to split from their own group. SAMCRO leads the renegades to their guns that were recently stolen by the Mayans, then shoots each one of ‘em dead. (And with that, I’ve officially lost count of this season’s casualties thus far.)

Later, Nero and the Mayans are aggravated to find that the guns they stole have been discovered. They’re informed of a meeting taking place downtown later that day, where some of the One-Niners’ rebels plan to discuss their split from the gang. But before that meeting can even begin, Nero and the Mayans show up and, once again, fire away until none of the purple gang members are left standing.

FAMILY MATTERS | Following SAMCRO’s recent murder of the Indian Hills associates who helped hit Lin’s gun delivery, one of Lin’s men informs Jax that only one body was found at the scene of the crime. (The other? Presumably carried away by Jury, who’s still mourning the death of his loved one.) Bobby calls Jury later that day and asks who, exactly, those two men were, feeding Jury a lie that his associates are now bragging around town about their involvement in the gun delivery. Jury reveals that he knew one of the men — Gib O’Leary, Jury calls him — but judging by the hardened look in his eyes, Jury can see right through Bobby’s tale, and he’s gunning for SAMCRO next.

Also in the hour:

* At Diosa Internacional, Sandy’s father shows up, looking to take money from her. He’s violent, foul-mouthed and an altogether terrible guy, and when Gemma sees the man rummaging through his daughter’s purse, she hits him (and gets hit right back, which sends Nero into a tailspin). That night, after Jax’s club business is taken care of, he accompanies Gemma to Sandy’s dad’s place. She offers him a flirty apology (and pineapple upside-down cake, for good measure), then proposes the two have a drink. Unbeknownst to Sandy’s old man, Jax is waiting outside, and right on cue, he enters the man’s house to beat him senseless.

* Wendy comes home early to find Brooke and Ratboy on the verge of sleeping together, which is about 14 bad decisions rolled into one. But Wendy remains tight-lipped in front of Gemma about the pair’s bedroom activities, reluctantly confessing that she knows what it’s like to love someone you shouldn’t (and can’t) be with.

* After witnessing the skirmish between Gemma, Nero and Sandy’s dad, Abel asks if his daddy does bad things, too. (I’m not sure there’s any character more in need of a hug than Abel, who has asked Gemma some truly devastating questions in the last two weeks.) Gemma tells her grandson that Jax is a good man, but Abel seems a bit unconvinced.

What did you think of Sons‘ latest episode? Drop a line in the comments section below with your thoughts.