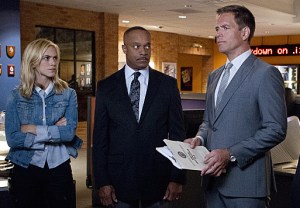 CBS’ NCIS opened its 12th season on Tuesday night with an episode that started off as a routine escorting of a team member home from Russia, but soon enough segued into an action-adventure, stranding Gibbs and McGee in the Russian wilderness.

Setting up the events, we briefly meet Sergei Michnev, a Russian mercenary whom Deputy Ambassador Anton Pavlenko suspects has been stalking an NCIS tech whiz named Kevin. Michnev shrugs off the implication of bad behavior, stating that his interest in NCIS Special Agent Gibbs, back in the USA, will “remain personal. Deeply personal.”

Back here, Gibbs gets word from Vance that this Kevin senses he is being followed, so SECNAV wants Gibbs to escort the lad back to the States for the funeral of his uncle (whose body is being flown from Russia to the U.S.). With Gibbs in need an extra man, lean-and-mean DiNozzo feigns injury from running with the bulls in Spain this summer and McGee notes he just got back from Dubai, leaving Bishop to volunteer. Gibbs can only take a senior agent, though, and McGee it is.

Getting to Kevin in Russia is no biggie, but their helicopter ride to an awaiting ship is shot down out of the sky by a surface-to-air missile. Two crew are dead, but Gibbs, McGee, Kevin and a female pilot, Banks, survive — though the latter is gravely injured. Sergei and his men eventually show up at the crash scene, but Gibbs, McGee and Kevin have hidden by then, and the pilot refuses to give up their location. It’s only when one of Sergei’s goons gets too fresh with Banks that Gibbs resurfaces to drive a blade into the dirtbag.

Gibbs & Co. make tracks for the Finland border 20 klicks (kilometers) away, while back home it is discovered that the dead uncle Kevin had shipped home was not felled by cancer but bullets — and he has a micro SD card buried in his skin. On that card is a defense system-crippling virus Kevin was set to sell to Sergei, to pay his uncle’s medical bills, but at the last minute the kid came to his senses. Alas, an oblivious Abby accesses the mystery file and releases the worm into the NCIS computers, even jamming the phones just as McGee has gotten high enough in the mountains to call HQ.

In a shootout with Sergei’s men, Kevin gets hit, and Gibbs is a bit too happy to cauterise the chatterbox’s wound with a hot knife. Then, just as they make it to a cleared road, Gibbs offers to stay behind and slow down their pursuers. McGee reluctantly agrees to the plan, and Gibbs proves, of course, quite adept at thinning the enemy’s ranks, with two rifle shots. But just as Sergei himself steps into the crosshairs and Gibbs fires his pistol at the baddie, DiNozzo arrives with a vehicle to spirit everyone to safety.

Gibbs thus leaves Sergei for dead, but later learns, during a very serious visit from Vance, that Sergei in fact survived — and that he’s got some sort of connection to Ari Haswari, the rogue Mossad officer/half-brother of Ziva David’s who years ago killed Special Agent Kate Todd and ultimately was taken down by Gibbs (so the official record says, though it was actually Ziva who dispatched with her kin).

Now, still alive and obviously with a score to settle, Sergei surely will be “gunning for us,” Vance warns. But as Gibbs notes, “Not if we find him first.”