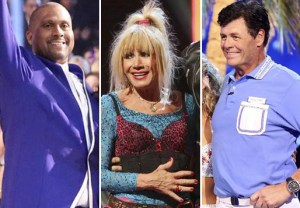 Despite some delightful high points — Leah Thompson’s knockout jive and a fabulous foxtrot by Janel Parish — during a “My Jam Monday”-themed Week 2 of Dancing With the Stars, there were plenty of possible candidates for a trip to the guillotine.

Michael Waltrip’s not-so-sensational samba certainly put him at risk, but he had plenty of wobbly company — Tavis Smiley, Betsey Johnson, Tommy Chong and Randy Couture, I’m talking to you! — to bring suspense and uncertainty to the big announcement.

As our teetering-on-the-brink celebs sweated it out, Season 19’s second (and last) “results” show showcased the usual encore dance (Janel’s foxtrot got the nod via Twitter votes) and high-energy performances by Norwegian hit-makers Nico & Vinz and the ever-fabulous Sia.

“The art of dance I absolutely love, but like anything in life, it takes time to perfect it,” said Smiley, before quickly reminding everyone his book tour has cut into his practice time.

“I don’t care what it is, you have to spend time at your vocation,” he added, before concluding, “It’s been a wonderful experience, and I wish everybody all the best.”

And with that, it’s your turn.

Which couple should have really gone home tonight? Or did America get it right? Will you miss the Tuesday night results shows when DWTS goes back to a Monday-only schedule next week? Sound off in the comments!