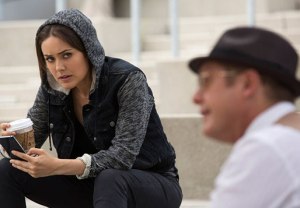 If there’s one thing The Blacklist has taught us, it’s that Ray Reddington demands all eyes on him at all times.

But during the NBC drama’s Season 2 premiere, it wasn’t the criminal mastermind at the center of everyone’s attention. Instead, Monday’s jam-packed hour belonged to two very important (and very different) women.

Before we get your thoughts on the sophomore premiere, let’s review the finer points of “Lord Baltimore”:

THE ART OF WAR | We find Red in the back of a Jeep that’s barreling through Cameroon, where he’s been seized by a war lord named Yabbari — though my spelling of that name is admittedly questionable — who is unhappy with Red crossing his turf. “I told you if I ever found you on my territory again, I’d kill you,” Yabbari says, somewhat gleefully. But as always, it’s Red who gets the last laugh: He offers Yabbari $3 million in exchange for the names of the bounty hunters that Berlin has hired to tail Red. With the help of a few Hellfire missiles, Red gets the name he’s looking for — Lord Baltimore, a world-class data tracker — and promptly burns the money he promised the war lord and his associates.

Red informs Liz (who’s holed up in a motel, for now) that Lord Baltimore is their best hope for tracking down Berlin. As the task force begins digging, they zero in on Rowan Mills (hi, Krysten Ritter!), a data engineer at a major analytics firm who recently had $250,000 appear and disappear from her IRA in the blink of an eye. Rowan seems innocent after her first round of questioning with the FBI, but after she gets a threatening phone call warning her not to speak to the FBI again, Rowan enlists Liz and her team to trace the call — which came from an apartment leased by… Rowan?

SISTER ACT | Rowan is able to explain the funny business by citing her long-lost sister, Nora, who allegedly perished in an accident years ago but is seemingly still alive, using Rowan’s identity to get her own apartment. Rowan and her mother both confirm that Nora was once molested by her uncle, forcing her to lead a much darker childhood than her sister. Meanwhile, Aram’s detective work reveals that Lord Baltimore is not, in fact, hunting down Red, but a woman who fits a specific set of criteria. Liz offers Red an enormous file of possible targets, and Red immediately recognizes one of them: Naomi Hyland, his former wife. (We’ve missed you on TV, Mary-Louise Parker! Also, is anyone else surprised by how majorly star-studded this premiere is?) Red urges Liz to get an FBI unit to Naomi’s apartment immediately, since his former flame is in imminent danger.

Back at Rowan’s apartment, a man named Marcus enters unannounced, and although Rowan tries to get him to leave, he insists on playing a record for her: “We Three (My Echo, My Shadow and Me)”. Marcus talks Rowan through the song, trying to jog her memory about a particularly fateful night years ago… and just like that, Rowan remembers. “How long was I gone?” she asks, stone-faced, before rounding up a team of associates outside Naomi’s apartment. They gun down most of the guests and FBI agents at Naomi’s place, and Naomi is taken to a remote location while Liz arrests Rowan — or, as we come to know her, Lord Baltimore in the flesh.

Later, Liz questions Marcus about what triggers Rowan’s memories, then plays the same song for Rowan on her cell phone. Within minutes, it’s revealed that Rowan is really Nora Mills, who killed her sister years ago in order to claim her sibling’s less tragic identity. At the same time, Ressler heads to Nora’s mother’s house, where he finds a van in the backyard that contains the decayed corpse of the real Rowan. (Whew! Still with me?) At a rundown apartment building nearby, Berlin uncovers Naomi’s face (accompanied by a bone-chilling, “Hello, Mrs. Reddington.”), climbs on top of her and takes a Polaroid photo of her face. And although Red and Dembe are clued into Naomi’s location, all that remains at the apartment by the time they arrive is Berlin’s pocket watch, which now contains the most recent photo of Naomi. Later, a package arrives for Red at the hotel where he is staying, and he calls Berlin upon viewing its contents. Berlin vows to send Naomi back to Red piece by piece, just as Red did with Berlin’s daughter. The episode’s parting shot? Naomi’s severed finger, resting in an elegant gift box. Yeesh.

* Red is briefly captured by former Mossad agent Samar Navabi (House of Cards’ Mozhan Marnò), who knows Red from a previous dust-up in Haifa, Israel, which killed two of her fellow agents. Red also knows that Samar’s brother perished in a 2009 bombing — hence the falcon tattoo she has in his memory — and although Samar’s time on the screen is limited, surely she’ll be back on Red’s radar very soon.

* Red and Dembe pay a visit to Harold Cooper’s apartment, where the former FBI director now gets around with the help of a cane. (Is it in totally poor taste to say that the past few months have done wonders for Cooper’s physique?) Red attempts to convince Cooper to return to work, but his argument seems to fall on deaf ears… until the end of the episode, when Cooper returns to the FBI headquarters and is welcomed with open arms. Also receiving a warm welcome? Liz’s new haircut, which must mean Megan Boone’s conspicuous wig days are behind her. Rejoice!

* Ressler spends most of the hour avoiding Dr. Friedman, the FBI’s resident shrink, who is scheduled for regular appointments with the agent and his undoubtedly damaged psyche. Ressler blows off the doc more than once, but behind closed doors, his pill-popping habit indicates he’s not doing so well on his own.

* Liz receives paperwork confirming her annulment from Tom. She insists on keeping the last name Keen, considering it was never really Tom’s surname to begin with — and speaking of Tom, might he be the one spying on Liz throughout the hour?

What did you think of The Blacklist‘s Season 2 premiere? Grade the episode via our poll below, then hit the comments to back up your choice!