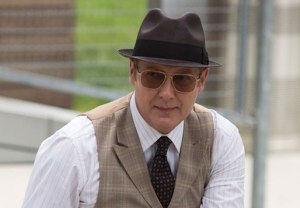 Let’s get something out of the way: Season 2 of The Blacklist won’t be in a rush to reveal if Ray Reddington is Elizabeth Keen’s father.

But according to James Spader, there will be more important questions to address when the NBC drama kicks off its sophomore run.

Ahead of the show’s Season 2 premiere (Sept. 22, 10/9c), the man behind Red fielded questions from the press on Monday, dropping some hints about what (or what not) to expect when the series returns.

For example, those burns seen on Red’s back in the Season 1 finale, which hinted at the real relationship between him and Liz? You won’t be seeing Maury Povich arrive with a DNA kit, so to speak, over the first few episodes of Season 2. “That story has not been extrapolated on,” says Spader, who was filming Episode 4 when he spoke with reporters. “That’s something to just let percolate for a bit. Elizabeth Keen has spoken of a memory of being in a fire when she was a child, and somebody pulled her out of that fire. She may be assuming that it’s her father, but we’ve never said whether it’s her father or not.”

In fact, Spader — who has previously said it would be “too easy” if Red were Liz’s biological father — thinks viewers will be putting those daddy issues on the back burner as Season 2 gets underway. “If the route is circuitous enough, the destination becomes less and less important,” the actor explains. “I wonder whether that will continue to be the most important question that people ask as the show goes on, or whether the more immediate relationships and the nature of those relationships will eventually become more compelling. Given our show and what our show is, I don’t think anything is as simple as it appears.”

So, what certainties can Spader offer? For one, Red’s relationship with the FBI will have shifted when the show picks up, given that his task force essentially fell to pieces in the season ender.

“The protocol for how Red operates changes dramatically,” Spader says. “He just has to conduct his relations with the FBI in a very different manner, considering the events of last year. He’s the same person, but the circumstances that he’s putting himself into are certainly different than what has preceded it.”

And even though the real Berlin eluded Red in the freshman finale, Spader promises that Red will come face-to-face with Peter Stormare’s baddie soon into Season 2.

As for what the duo’s dynamic will be upon meeting each other in person, Spader would only say, after a long pause: “Cautious.”

Blacklist fans, what are your hopes for Season 2? Which questions are you dying to get answered? Drop a line in the comments below and tell us your thoughts.