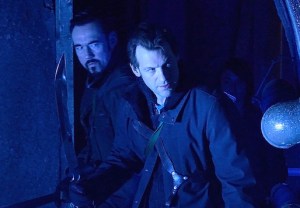 This Sunday on FX’s The Strain, Eph & Co. sought out the Master’s lair, perhaps not prepared for what they would find, while Zach… oh, Zach. [Headshake]

After Vasiliy engineers a UV flash bomb type of thing, he, Eph, Nora and Setrakian broach the belly of the beast — the subway tunnels beneath where the World Trade Center stood, seeing as The Master is traditionally “drawn to places of human misery.” Swell guy, he is.

As such, the gr’ups leave Zach back at the pawn shop with Nora’s mother, who’s, of course, addled — and seriously jonesing for some cigarettes. After Mariela almost creates a scene, screaming at the pawn shop’s gated entrance, Zach offers to fetch her some cigs — if she agrees to stay in the basement.

Speaking of moms: Prison van escapee Gus comes home to discover that his mother has turned, and he blames himself for not being there for her. On a lighter note, he finds some pleasure in dispatching with that pesky, turned landlord!

In the subway tunnels, Eph & Co find dozens of strigoi, nesting as they do during daylight hours. Vasilly is game to mass-kill them all, but Setrakian warns that would alert the Master to their presence. After nearly getting run down by a passing train, the quartet find a crawlspace which they believe the strigoi use. Eph goes first, and once on the other end of the passage, he hears Kelly’s voice, pleading for his help. This distracts him from helping Setrakian get through. Meanwhile, following Nora into the hole, Vasilly gets stuck — and with a vamp on his tail. But Nora yanks him out in time.

Eph meanwhile is haunted by Kelly’s “voice,” then surrounded by several strigoi. As he taunts them to attack, The Master swoops down from above, then stands towering over Eph. Thwarting Eph’s attempts to stab or shoot him, The Master gurgles at Setrakian’s latest pupil, “I will take everything from you — your wife, your son….” But just as the Boss goes in for the bite, Vasilly rolls out his UV bomb, zapping the other strigoi but allowing The Master to escape. Setrakian is furious to have lost this shot, and takes his anger out on his adversary’s resting place, the ornate coffin he decades ago hand-carved for (an again-missing) Eichorst.

Zach meanwhile slips into an abandoned convenience store, finds some cigs, but — for some reason — hides in the dark storage cellar with the narrow accessway when some looters come in. Down there, he spots a strigoi, one he must pass by to get the phone he (ugh) dropped. Zach makes it back up safely, but the looters aren’t so lucky. Also, to be filed under the category of Finally: Storylines finally (briefly) intersect when Zach literally bumps into Gus on his way out.

The hour ends with Eph & Co. discovering a passageway, beyond which hundred if not thousands of strigoi are gathered. The team just barely keeps uber-vengeful Setrakian from barging in on the brood, as Vas observes, “That’s a lot of munchers.” Indeed.