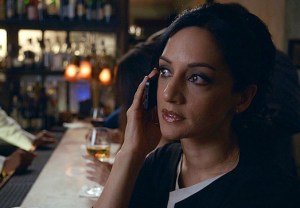 The Good Wife is “Hitting the Fan” all over again.

And by that, I mean that our core characters’ dubiously planted seeds are yielding poisonous fruit and that the Season 6 premiere is on par with the show’s seminal Season 5 Episode 5 masterpiece in terms of pure, delectable tension, riveting performances and sharktooth-sharp writing and direction.

In other words, showrunners Robert and Michelle King are seeing last year’s law-firm mutiny and major-character kill-off and raising it with the most dread-inducing prison scenes since HBO’s Oz, the prospect of an epic and awesomely ugly political campaign and an intern who’s putting the ante in her panties (or lack thereof).

So, without further delay, let’s discuss the comings and goings (and manipulatings and cuttings) of “The Line”:

THE CARY DIARIES | Following the Season 5 finale’s bombshell of Diane expressing an interest to join Florrick-Agos, we see Cary heading to his car. Out of nowhere, a pair of cops arrest him and leave him to hang out for hours on a Chicago precinct’s bench (his arm hanging from a hook above his head, his one phone call left unmade), enduring a strip search (side note: dude is ripped) and being sent into a dark cell that definitely will make an appearance in my Sept. 21, 2014 nightmare highlight reel.

But Cary’s not afraid of the dark — or not so afraid that his brain CTRL+ALT+DELs. He finds a patsy to declare himself a Lockhart-Gardner client who (after struggling to remember poor Cary’s name) tips off David Lee and (more importantly) Kalinda to his predicament. Alicia, of course, learns the charges involve Cary allegedly giving advice on how to evade arrest to soldiers of Florrick-Agos’ very lucrative, very dangerous dealer client Lemond Bishop, and she promptly realizes her No. 1 task is delivering the bad news. Her underlying message — “Cary will not turn on you, Mr. Bishop, believe me” — makes Will Gardner furiously clearing Alicia’s desk seem like a grade-school game of gin rummy. (A high-stakes game of gin-rummy, but still… ) Cary’s astronomical bail (more on that in a moment) — and the fact that Chicago doesn’t have bail bonds — leads to some tense meetings at Florrick-Agos where that rat Carey Zepps is more interested in his livelihood than his partner’s actual life. (#nevertrustedhim #wheresclarkehaydenandhismoralcompass) Alicia, though, looks into a second mortgage, while the delightful Robyn offers her entire $15,000 in savings (plus money from her parents) to help the cause. (Alicia and Cary had better be faithful to their perky blonde investigator when the time comes, I swear).

Cary’s wealthy dad, though, turns out to only be good for $8,000 — and so, our fella remains jail-bound much further into the episode than I’d anticipated. At this point, an imprisoned cohort of Bishop makes nice with Cary and tells him the drug kingpin wants Cary’s finger — as a sign that he understands the stakes of cooperating with the state. Somehow, they settle on a deep, self-inflicted flesh wound to the palm, but Cary’s grim protest to Alicia and Diane — “I just fell down; it’s nothing serious” — turns out to be one of the bone-chillingest moments in Good Wife history. (OK, he’s repping a druglord, but Cary’s ultimately too decent to get shanked in the shower, right? ROBERT AND MICHELLE KING, Y’ALL BETTER ANSWER IN THE AFFIRMATIVE!)

Thankfully, Cary’s willingness to bleed brings Bishop to Florrick-Agos HQ — to have “a general conversation about [his] business holdings” — while Dexter Roja, the frontman for Bishop’s legit businesses — simultaneously and totes coincidentally delivers $1.5 million in cash to spring Cary from the coop. Oh, would that it were all so simple! (Read on to find out how things go sideways.)

SHARK FINN? | Methinks we’ve found a hole in the hull of the Finn Polmar-Alicia Florrick ‘ship. (Speaking of which, does Nestor Carbonell have any openings in his schedule?) Yep, it’s Matthew Goode’s flirty DA who’s pushed to have Cary’s bail equal the street value of the heroin he’s been charged with protecting. He then goes and gets Alicia disqualified from representing Cary. “You should be honored. I didn’t want to go up against you,” he tells his onetime ally, as she casually (yet beautifully visciously) asks if his vigor regarding he case involves his late, drug-addicted sister. (OUCH!) It all ends in a handshake and a smile, and I’m not sure if it’s hot, cold or all of the above. (Please weigh in down in the comments.)

WWKD | Um, yes, of course I mean “What Would Kalinda Do?” Everyone should ask themselves that question at least 15 times a day, sheesh. When The Lady Sharma hears from married former flame (and law-enforcement agent) Sophia moments before Cary’s arrest, she does the basic math and realizes the booty call was an attempt to keep her out of police clutches. Kalinda turns the tables on her lady flame by demanding to know the identity of the confidential informant from Bishop’s crew, but then gets sidetracked by the friendliest-but-threateningest of warnings from Bishop himself: “I don’t want you to pursue this line of investigation. Do you understand?” Sophia, though, has a final word of advice to Kalinda — “Your friend Cary — he’s guilty” — that makes you wonder if Mr. Agos bent the law, or at least colored outside the lines of the law, to keep a lucrative client on the Florrick-Agos roster. I mean, it’s not as if Cary and Alicia don’t know who Bishop is, or how he makes his money. But once you’ve locked hands and started a waltz with the devil, you can’t exactly complain if you glide into the seventh circle of hell, can you?

RUN, ALICIA, RUN | Isn’t it funny that the big bombshell of the Season 5 finale — which is reiterated in the opening scene of the Season 6 premiere — seems so gosh-darn quaint now? Yep, there’s Eli Gold, insisting Alicia would make a great state’s attorney. “You’re a brand. You’re Saint Alicia,” he offers. Her response — “I’m never saying ‘yes'” — is not the same as saying ‘no,’ is it? This sends Eli, and his hilarious/unemployed daughter Marissa, on a path toward polling peeps about Alicia’s chances in an election. Turns out, she’d crush incumbent James Castro, and Eli manages to get Peter interested in those numbers by arranging a meeting with the Governor and his estranged cronie that ends with Peter and James screaming in anger. “Find out if Alicia wants to run,” sighs Peter, but perhaps Eli is less interested in Alicia’s civic possibilities than in keeping her on a leash in light of hers and Peter’s strained marriage. “I’m the only one trying to keep Alicia on board!” he tells his boss, who, for the record, keeps on flirting with that redheaded intern who doesn’t need an actual name — thanks to her reputation for going commando at work. (In the episode’s funniest scene, Marissa mimes to Eli a chat between the hottie and the Governor: “Really, I have to wear panties?” “For decorum’s sake, yes.”) But when Marissa finally asks if the chick isn’t letting anything come between her and her Calvin (Klein skirt), the latter lady lifts up her garment and cooly replies, “Does that answer your question?” Um, would she be this baldly confident if she wasn’t de-briefing (ahem) Governor Florrick? FLORRICK-AGOS-LOCKHART? | Finally, there’s the matter of Diane and her intent to join former mutineers Alicia and Cary in their new venture. She tells Alicia over a breakfast that Cary (it turns out for good reason) skips, that she Kalinda is better than Robyn, and her employment at the new firm is a dealbreaker. Oh, and she wants an equal vote with Cary and Alicia — since she’s bringing “prestige and $38 million.” (Fair enough.) Still, Diane’s parting words, that she and Alicia will own “the largest firm in the country run by women,” makes me wonder if she’s noticed Cary has a penis under his expensive suits. Diane, meanwhile, tells David Lee and Louis Canning that she’s — LOL! — retiring, and that she wants “a dignified exit” from the firm. When Alicia stops by LG HQ to ask her old boss to represent Cary, however, the jig is up, and David and Louis begin waging a campaign to win over Diane’s former clients. (Of course they do!)

What did you think of The Good Wife Season 6 premiere? Are you nervous for Cary’s life or just excited for Matt Czuchry’s ability to show his acting chops? And will Alicia ultimately run? Sound off in the comments!