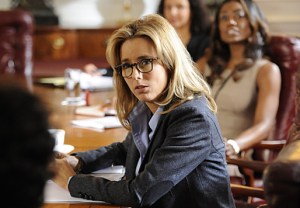 Yes, new series follows the appointment and first days in office of a female U.S. Secretary of State (played by Téa Leoni, The Naked Truth). And yes, Leoni’s Elizabeth McCord does, before the hour is up, earn more media attention for her wardrobe choices than for her diplomacy — just like Hil. But that’s where the similarities between the two women end, and what’s left is an intriguing, D.C.-set drama.

When we meet Elizabeth, she’s a former CIA analyst teaching at a Virginia university where her super-supportive husband Henry (played by Private Practice alum Tim Daly) is a religion professor. The pair and their teenage son and daughter live on a horse farm; one day following the accidental death of the current Secretary of State, a motorcade bearing the president of the United States shows up while Elizabeth is mucking out the stables.

Turns out, the current POTUS (played by Keith Carradine, Fargo) is Elizabeth’s old CIA boss, and he wants her to fill the newly vacated post in his administration. “I know how you think, how you work. I trust you,” he says. “You don’t just think outside the box — you don’t even know there is a box.”

So two months later, we pick up with the McCords, who have moved to the nation’s capital so Mom can be one of the most influential women in the world. The transition is not without its struggles: Elizabeth’s staff (including Cheers‘ Bebe Neuwirth as the judgmental Nadine) isn’t fond of her, the president’s chief of staff Russell Jackson (played by the omnipresent Zeljko Ivanek) warns her not to circumvent him, and the McCord kids mope a bit, causing Elizabeth to worry that she’s made a bad decision for her family.

The workplace challenges only get tougher as Elizabeth tries to free two idiot American teenage brothers who’ve gotten themselves captured after crossing into Syria from Turkey. When a Russell-approved mission to liberate them goes bust, Elizabeth bends the president’s ear and then taps into her network of former accomplices to get the job done on the downlow. And when the press gets wind of the covert dealings, she makes a show of going through with a (very minor) makeover, thereby dominating the news cycle and diverting attention away from the delicate overseas negotiations.

By the end of the episode, the boys are safely back on American soil, earning Elizabeth a win and a warning from Russell not to go behind his back again. It seems like Secretary of State McCord has gotten her groove back when she deftly navigates a sticky formal dinner with the polygamist head of a foreign country, but her joy disappears when she finds Henry in her office, looking grave. His news: Elizabeth’s old co-worker and friend, George, who’d warned her that her predecessor’s death wasn’t as accidental as it appeared, has been killed in a car crash. “That wasn’t an accident,” Elizabeth says, crying as she hugs her husband. “I know,” he replies. Dun-dun-DUN!

Now it’s your turn. What did you think of Madam Secretary? Grade the premiere via the poll below, then hit the comments to back up your choice.