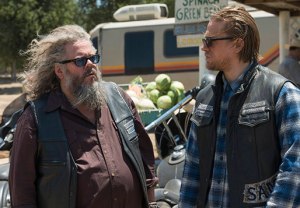 I think it’s safe to say the Sons of Anarchy went easy on us this week.

After last Tuesday’s super-sized, thoroughly brutal premiere, the final season’s second installment was much less of a roller coaster ride — y’know, as far as Sons of Anarchy episodes go.

But with this being the Sons’ final ride, even Tuesday’s tame (by comparison) hour wasn’t without its share of bloodshed.

Read on to learn what took place during “Toil and Till”:

RUNNING OUT OF JUICE | At Wendy’s house, Juice finally frees a bound and gagged Unser from his uncomfortable spot in the bathtub. Then, it’s time for the two men to chat. Unser knows that Gemma is the one keeping Juice safe (after all, she and Unser are the only ones with keys to the place), and Juice reveals he’s hiding from the club on account of “old sins.” Sensing that Juice has no game plan or final destination, Unser pops the million-dollar question: “You want my help?”

Following what we can only assume was a resounding yes from Juice, Unser ventures to the sheriff’s office, where he meets newly instated Sheriff Jarry (The Bridge’s Annabeth Gish) and offers his police expertise, especially where Tara’s murder is concerned. Jarry agrees to bring Unser on as a consulting investigator, and hands over all the files related to Tara’s case — but not before Unser urges the new sheriff not to write off SAMCRO as white trash. “Jax Teller is formidable,” Unser warns. “As smart as he is dangerous.”

Later, Unser pays Gemma a visit to tell her that he knows of Juice’s whereabouts (but doesn’t plan to spill the beans to the club). It’s nice to see Gemma putting friendship over club rule, Unser says, while all of us at home practically scream, “If you only knew what she’s done!” (Or, uh, maybe I’m the only one screaming that?) When Unser goes to the trailer for a nap, Gemma brings him some tea, and subsequently sees the paperwork for his new investigative gig. She gets emotional when faced with the photos of Tara’s grisly death, but the guilt seems overshadowed by her concern that Unser will find out who the real culprit is. Gemma stops by Wendy’s place and gives Juice everything he needs to get the hell outta Dodge — including a burner phone, money and the keys to her dad’s house, where he can stay until things calm down. But when Juice hits the road and fails to muster enough courage to talk to Chibs on the phone, he ends up returning to Wendy’s, looking more distressed than ever.

GUNNED DOWN | Elsewhere in the episode, SAMCRO begins its dismantling of the Lin Triad, beginning with the Chinese gang’s next gun delivery. (“We’re going to unravel Lin. Take apart his business,” Bobby explains. “But for now, no one can know it’s us.”) Tig and Ratboy tail the Chinese to a private road where the delivery will go down, while Jax, Bobby and Chibs enlist back-up from Jury and the Indian Hills gang, including two “local muscle” associates that Jury says can be trusted. (Hi, Finn from Gilmore Girls!)

SAMCRO’s interception of the gun delivery goes mostly according to plan (in short: lots of casualties, both Triad members and their gun customers), save for one of Lin’s associates hopping into a truck and attempting escape. Jax and Chibs successfully chase him down, though, promptly shooting him after cracking open a briefcase full of heroin — Lin’s payment in exchange for the guns. It isn’t long before an angry Lin learns of the gun delivery shakedown, but Nero defends Jax (who set up the gun exchange in the first place), while Jax and Bobby similarly deny any involvement in the ordeal.

But there’s still some loose ends to tie up, and Jax, Bobby and Chibs are off to take care of it. They pay Indian Hills’ local muscle men a visit, under the guise of paying them for providing a truck at the gun delivery. Instead, they kill both of the men, then set up Lin’s heroin and the guns to make it look like the two associates infiltrated Lin’s gun delivery earlier that day. Moments later, Jury arrives at the house and upon entering, finds both of the men dead at the hand of Jury’s own gun. As he cradles one of the dead bodies — which seems to be that of Jury’s now-deceased son — Jax finally heads to Gemma’s and is reunited with his own boys, where he cradles a sleeping Abel in much the same way. Sob.

* When Abel begins asking questions about his parents’ whereabouts — specifically, and heartbreakingly, why his mom has gone to heaven — Gemma gets surprisingly verklempt while trying to explain the situation to her grandson. “Because your mommy was an angel,” Gemma says, tearful. “And all angels go to heaven.”

* On their way to sign up Abel for pre-school, Nero and Wendy bond over their past struggles with drug abuse. When Nero accidentally makes a dig at his baby mama for using during her pregnancy, resulting in their son’s spina bifida, Wendy takes the negative comment in stride, admitting that the more messed up Jax’s family is, the more Wendy wants to be a part of it. It’s a backwards bonding moment for the pair, but something tells me we shouldn’t take these moments of levity for granted.

* Prior to SAMCRO’s takeover of the gun delivery, Jax encounters August Marks, who is sorry to hear that there’s no leads on Tara’s case. He urges Jax to think clearly and act rationally when they do find her killer. Jax solemnly swears, “When I find out who killed my wife, I won’t do a thing until the time is right.” I smell foreshadowing!

OK, your turn. What did you think of the episode? Hit the comments with your thoughts!