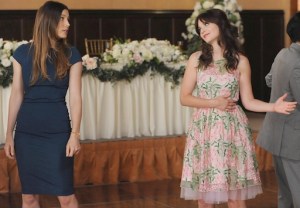 When a best man is Jess’ best bet for wedding nookie, the New Girl heroine breaks out the sex fist and goes after what she wants.

I promise, the Fox comedy’s Season 4 opener isn’t as dirty as it sounds, even though Jessica Biel spends most of the episode slinking around a dance floor, and Nick and Schmidt have a protracted discussion about whether or not to engage in a four-way with two bridesmaids.

Okay… maybe it is as dirty as it sounds. If you watched, we want to hear your thoughts in a minute. But first, read on for what happens in “The Last Wedding.”

RELATED Fall TV Spectacular: Exclusive Scoop and Photos on 42 of Your Returning Favorites, Including New Girl

“THAT’S TOO MANY WEDDINGS” | Four months since we last hung out with the roomies, they’re about to attend their last wedding of the season, and even the perennially sunny Jess has nuptial fatigue. Schmidt, however, sees a greater purpose in attending: “We are hooking up tonight, all five of us,” he decrees, doing his best Ned Stark impression as he rallies his pals for one last hurrah before fall. “Winter is coming. No one comes home alone.” Inspired, Jess comes up with an awkward metaphor for their combined hook-up capability (the aforementioned “sex fist”), then everyone puts on their pretty clothes and heads to the bash.

STIFF COMPETITION | The gang has various levels of success with Operation: Garter Toss. (They don’t call it that, but they should.) Coach’s romantic overtures invoke the ire of several waitresses, photographers, etc. he’s already bedded earlier in the summer. Cece’s appearance — and the news that she’s no longer dating Aussie hottie Buster — throws Schmidt so much that he can’t even go through with the group sex he wants so badly at one point in the episode. (This comes as a huge relief to Nick who, being a good pal, had decided to go along with the ménage a quatre to divert Schmidt’s attention from his ex.) And Winston is so sore from police-academy training, his closest relationship throughout the episode is with the ice packs liberally applied to his body. (Side note: Please let this be the season Winston gets a serious girlfriend. Please?)

So that leaves Jess, who decides that she wants to go home with best man Ted (played by Veep‘s Reid Scott). Too bad that Kat (played by 7th Heaven alum Jessica Biel) has come to the same conclusion. Kat is gorgeous, incredibly smart and happy to let everyone know just what a catch she is. “Here are the facts: I’m technically a genius, I have a photographic memory, and I lost my virginity to Malcolm Gladwell,” she informs Jess, adding that she watches half an hour of porn each night to stay abreast of current trends. (For the record, my favorite line of the episode is: “In the coming months, I’m predicting a throwback to missionary. It all depends on what happens in Syria.”)

YOU DO YOU | After initial attempts to catch Ted’s interest fail, Nick finds Jess hiding in the men’s room and gives her a pep talk. “Just be yourself, and if he’s not into Jessica Day, there’s something wrong with him,” Miller tells her. That logic fits: Nick isn’t into Jess enough to make a relationship work, and there’s leagues wrong with him. Reenergized, Jess declares that the sex fist (five) has become a sex finger (just her)… but it’s really no better a metaphor. She confronts Ted with all of her quirkiness, Kat counters with a photo of herself nude, and the dilemma so stymies the best man that neither woman winds up going home with him. Then Kat leaves with the officiant. Who wants cake?

Now it’s your turn. Rate the premiere via the poll below, then back up your choice in the comments!