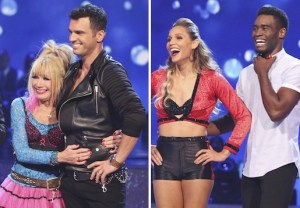 This just in from the Department of Imaginary Survey Results: Four out of five doctors who reviewed the full cast list for Season 19 of Dancing With the Stars asked, “Who the heck are these people?”

On the flip side, the bottom of the leaderboard was littered with plenty of charming but inevitable also-rans – comedian/stoner Tommy Chong, designer diva Betsey Johnson and political commentator Tavis Smiley, your days are numbered, no matter how enjoyable your pre-performance packages! – making the season’s initial elimination a nail-biter.

“I wouldn’t have had it any other way. I know Betsey had the malfunction with the boa [on Monday]… that was a disadvantage for her,”  said an incredibly gracious but emotional Lolo, who went on to blame her own missteps for her low scores. “I’m glad that she’s staying and she deserves to stay.”

And with that, it’s your turn. Was Lolo the right choice to go home? If now, which couple should have really gotten axed? Who’s your early favorite for Mirrorball glory? Sound off in the comments!