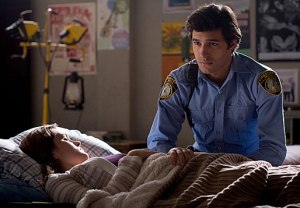 Of all the questions posed by Monday’s Under the Dome — and there were many — the one that prevailed was an issue of science versus faith.

Well, maybe that wasn’t only the important question. There’s also, “Why is the dome shrinking?” “How will the folks in Chester’s Mill ever get out?” and “What could a third season of this show possibly entail?”

But I’m getting ahead of myself. Here’s a brief recap of Season 2’s penultimate episode, “Turn”:

SIZE MATTERS | Joe, Norrie, Hunter and Rebecca are among the first to spy the dome’s contractions. Rebecca is unsure (that’s new!) of what’s causing the shrinkage, but getting everyone to the center of the dome seems like a safe-ish bet for protection. Of course, the real reason behind the dome’s contractions is the egg’s absence from Chester’s Mill, so Barbie enlists Hunter and the teenagers to help get the egg back (after Hunter sheepishly admits that he came to Chester’s Mill to spy on Don Barbara’s behalf, which earns him a few of Barbie’s signature slams against the wall).

The quartet heads to the dome’s edge, convincing the guard at the barrier (via a gun to Hunter’s head) to retrieve Don Barbara and inform him of the egg’s much-needed return. Norrie and Joe play one of Melanie’s recent vlogs, in order to prove she’s come back to life, and Barbie informs his father that without the egg, everyone in Chester’s Mill will die. (Probably by getting crushed to death, which ranks on the more gruesome end of the Ways to Die Under the Dome scale.) Barbie Sr. says he will return the egg via the root cellar in Zenith, and Norrie and Joe are sent to the lake to await his arrival. First, they make a quick pit stop at the sheriff’s office to pick up a walkie-talkie, and Joe finds a gun, which leads to a truly hilarious conversation between the teenagers. (“The last time you held a gun, you almost shot Melanie in the face.” “In other words, I didn’t!” That’s sound logic if I ever heard any.)

But the pair never needs the walkie or the gun. When Barbie Sr. retrieves the egg at the playground in Zenith, he’s able to safely pick up the power source without getting zapped (though his touch does cause the egg’s glow to cease). Just then, every guard in Zenith turns on the elder Barbie, insisting that the egg must stay where it is.

GOOD AND EVIL | The real dilemma of the hour, though, is Melanie’s rapidly declining health. (This week’s mysterious symptoms: coughing blood and hair loss. Hang on, is this The Strain?!) Rebecca and Julia don’t see eye-to-eye regarding how to help the girl — Rebecca is based in logic and science, while Julia continues to wax poetic about the dome and its many signs. The first point goes to science: Rebecca realizes that a blood transfusion can buy Melanie some time, and lima beans can help determine which blood type will match Melanie’s. (My personal favorite part of the episode is Rebecca’s sudden exclamation of, “Lima beans!” and Sam responding the way that all of us at home probably did: “Come again?”) The transfusion process happens remarkably quickly — like, within two scenes — and Melanie’s health is somewhat restored.

But when Barbie Sr.’s failure to retrieve the egg suddenly sends Melanie’s health into decline again, it’s Julia’s believe-in-the-dome philosophy that prevails. She visits the dome’s barrier and, uh, has a nice chat with the glass encasing, telling the dome to take her as long as the others can be spared. The dome listens pretty much instantly, and the contractions start up again.

TAKING A STAB AT IT | Elsewhere in the hour, Lyle tries to interpret Pauline’s postcards for Junior, hoping to find a prophetic image that indicates Melanie will get healthy again. But all Lyle can focus on is the image of him and Pauline walking safely into Heaven together. So, no help there. Meanwhile, a distressed Pauline is unable to conjure any more visions without the help of the egg. But after she confesses to Big Jim that she’s lost faith in just about everything and everyone, Big Jim soothes her and tells her she was brought into his life to guide him. So, in a scene that plays out like a way creepier version of the pottery sequence in Ghost, Big Jim assists Pauline in painting her next vision. The result: An image of a healthy Melanie, standing above eight handprints. (Never mind that blood dripping from your easel, Pauline. I’m sure it’s fine.)

In a convoluted scene that surely had Sherry Stringfield longing for her medical jargon days, Pauline explains that eight hands — four old, four new — must be laid upon Melanie in order to make her well again. All of the main players (including a skeptical Rebecca) carry Melanie’s body into the woods where she died in ’88, and once Sam and Junior each grab one of Melanie’s hands, the girl is revived and seems completely healthy. Well… until a gaping hole opens in the ground beneath Melanie’s feet, and she sinks into the abyss. Distraught, Pauline confesses to Jim that her latest vision hinted at Melanie’s disappearance, but she didn’t realize the meaning behind the premonition. Big Jim kisses his wife to calm her down, and when he pulls away, Pauline’s mouth is covered in blood — a result of the knife that a jealous Lyle just stabbed through Pauline’s back (not fatally, though, as next week’s previews assure us). But it’s Big Jim who makes the biggest move of the hour, grabbing Lyle’s knife and putting it through the barber’s chest, offing the man for good. The drama in Chester’s Mill is at an all-time high, my friends. And there’s still one episode to go!

* Considering that Junior seemed a bit uneasy the first time Melanie kissed him, were you not a little surprised to see him acting so affectionate with her this week?

* Was I the only one who chuckled when Julia denounced her husband as “her old life”? It was three weeks ago!

* Was there a point in having skateboarder Ben return for one scene, only to take a jab at Norrie?

And most importantly, what did you think of the penultimate Season 2 episode? How do you think the finale will shake out? Are Junior’s sassy one-liners quickly becoming the best part of every episode? Tell us in the comments!