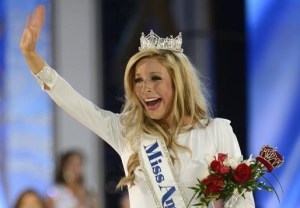 ABC’s broadcast of this year’s Miss America competition on Sunday night drew 6.7 million total viewers and a 1.5 demo rating, down 22 and 25 percent versus a year ago (where, yes, it also went up against football) and hitting an all-time broadcast low.

Speaking of “the ol’ pigskin,” NBC Sunday Night Football this week delivered 19.4 million total viewers and a 7.6 demo rating (per fast nationals likely to adjust up), down just a bit from last Sunday’s prelim numbers while up from last season’s Week 2 (49ers/Seahawks).

Over on CBS, Big Brother (7.3 mil/2.2) added a few eyeballs but dipped two tenths in the demo week-to-week, while the yet-to-be-renewed Unforgettable‘s season-ending double-pump — which didn’t wrap until nearly midnight (!) in this nape of the woods — is looking at (very roughly) 6 million viewers and a 1.0 rating (based on partial, scrambled numbers), currently down 14 percent and a tenth.

Fox’s broadcast of two unaired American Dad! episodes averaged 2.6 mil and a 1.3, up a tenth from its last fresh episode. The animated series now moves to TBS on Oct. 20.

NEXT SUNDAY: CBS’ Madam Secretary and The Good Wife premiere