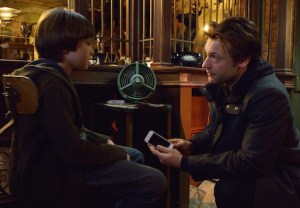 This week on FX’s The Strain… not a helluva lot happened, so this shouldn’t take much of your time.

The main catalyst for this episode was young Zach easily discovering — on a random pawn shop computer, via some “Find My Phone” app (that we never saw him log into?) and with a sketchy wi-fi signal —  that his mom’s iPhone was on the move, in Astoria. After Eph engages in a clunky “About last night…” convo with Nora regarding their clunky coupling, he sets out to find Kelly, but only locates her phone, in the possession of a homeless woman.

In trade for Eph bandaging an infected burn of hers, the woman shows where she found the phone — outside Kelly’s parked car. Cue a flashback to… 32 hours earlier, where an infected Matt comes home and thinks about, then decides against, attacking a sleeping Kelly. But when Kelly comes home early following an early school dismissal, Matt’s in not such a genial mood. As he tries to sting his honey, she manages to fend him off with any number of kitchen items — but not before some of his spittle lands a worm on her cheek. The parasite then [Shudder] wiggles and [Fidget] squiggles into the corner of her [Typed while looking through fingers] twitching eyeball. Shades of the infamous Strain billboards!

From there, Kelly begins to turn, as she seeks out Zach first at school, and then at her gal pal Diane’s place. There, Kelly finally lets loose with her proboscis, first on Diane’s son, then on Di herself. (In the current timeline, we see that Eph eventually found the two and had to put them down. Side note: Does no one on this show have a well-lit finished basement?)

While staggering around the streets, Kelly hears the Master call for her. She follows his voice to a subway tunnel, where they come face to face. “Rejoice,” the towering figure gurgles. “Embrace your glorious fate.” (Is Kelly fated to be some sort of “mate” for the Master? Is that why that other vampire steered clear of her earlier? After the gang learned that Dutch was responsible for breaking the Internet, she and Fet got the idea to boot things back up (if not also kill Edlritch Palmer) by sneaking into the Stoneheart Group and using their servers. Alas, “(in)competence” prevails over Fet’s “confidence,” and they are promptly corralled by the old man’s No. 1, Fitzwilliams. Eldritch meets privately with Dutch, hinting at his plan to “hack” human DNA in the name of immortality. He then orders Fitzwilliams to dispatch with the hacker and her rat-catcher friend, but Fitz decides to let them go free, seeing as he doesn’t agree with his employer’s endgame. Once back at the pawn shop, Dutch bails on the team.

The largely quiet, Eichorst-free episode then barrels to a close with… Zach remembering the time Mom surprised him with a shiny bike :-/

What did you think of “Loved Ones,” and the Master’s plan for Kelly?