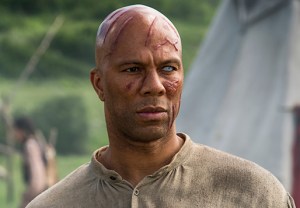 If you didn’t see this week’s big Hell on Wheels death coming, know that the actor who plays the ill-fated character did — because he himself had set the tragic twist in motion.

Recently on the AMC drama, the character of Elam (played since Day 1 by the rapper/actor Common) resurfaced after having been presumed dead as the result of a Season 3-ending bear attack. Instead, Elam had survived — though the mauling left him with brain damage. That ultimately set the stage for Cullen Bohannon (Anson Mount) to exact a “mercy killing” of his sometime compadre, in this Saturday’s episode.

The storyline was born of Common’s want to refocus on his music career, something that was difficult to do while filming Hell on Wheels up in Calgary for much of the year, especially during tour seasons. So, just before Christmas of 2013, he reached out to showrunner John Wirth and proposed that he be written out.

“It pulled at my heart because I really cherish the character,” Common told our sister site Deadline. “[It] wasn’t the easiest thing for me to do, but I have a lot of aspects to my career that I wasn’t able to nurture…. Acting is very, very important to me, but music is very important to me too.”

Explaining to Deadline the how of Elam’s exit, Wirth said, “We knew that if he was going to leave, he would have to meet some sort of appropriate and tragic end” — one that in turn fuels the remainder of Season 4. “It’s reinvigorated our storytelling [and] given us incredibly dramatic opportunities to put on film which we wouldn’t have had,” Wirth said.

What did you think of Bohannon’s “mercy killing” of Elam?