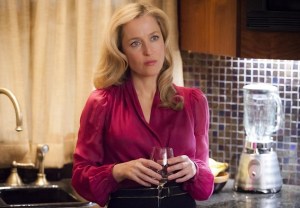 Gillian Anderson will be devouring a bigger piece of Hannibal when the NBC drama returns in 2015.

TVLine has learned exclusively that the X-Files vet — who recurred in Seasons 1 and 2 as the title cannibal’s shrink, Bedelia du Maurier — has closed a deal to be a series regular in Season 3.

The Season 2 finale set the stage for Bedelia to play a more significant role in the show’s third season — something exec producer Bryan Fuller confirmed over the summer at Comic-Con.

The season opener will pick up one year after Hannibal and Bedelia were seen jetting off to Europe, and feel like “a pilot for a new series starring Mads Mikkelsen and Gillian Anderson,” Fulller previewed to huge applause.

Anderson’s most recent full-time TV gig, NBC’s Crisis, was cancelled last spring. She’s also on board for Season 2 of the acclaimed BBC drama The Fall.

“The cast and crew of Hannibal are positively giddy to be welcoming Gillian to Season 3 as a series regular,” Fuller told TVLine in an exclusive statement. “A striking presence on stage and screen, she brings wit, grace and intelligence to every role she embodies. Screenwriting is so much easier when you’re inspired by a great actor and Gillian has filled the Hannibal writers room with wonderful inspiration. I can’t wait for audiences to see her make a bigger meal out of the Cannibal than ever before.”

Hannibal is set to return at midseason.