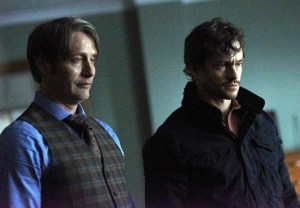 Hannibal fans were hungry for scoop at Comic-Con on Thursday, so executive producer Bryan Fuller sated them with tasty morsels at the show’s panel discussion.

As an appetizer, the EP unveiled a surprise guest who’ll be a “huge part of Season 3”: Raul Esparza, who played the presumed dead Dr. Frederick Chilton. (Eddie Izzard will also return in a flashback.)

“I can’t believe how much people fell in love with Chilton this season,” Esparza effused. “I love playing the part because he’s a total douchebag.”

For the main course, Fuller revealed that the show will introduce several characters from the novels next season, including Commander Pazzi (in Episode 2), Lady Murasaki (in Episode 3) and Cordell (in Episode 4). “I think Murasaki is going to kick all kinds of ass,” the EP added.

And for the crème de la crème: The cuisine next next season will be Italian, which is a clue as to where Hannibal was headed. Speaking of that mysterious cliffhanger, the season opener will pick up one year later – Episode 4 will fill in the blanks – and feel like “a pilot for a new series starring Mads Mikkelsen and Gillian Anderson,” Fulller previewed to huge applause.

“The entire first half of the season is relatively FBI-light. It’s all about the pursuit of Hannibal,” Fuller said, adding that the time jump was crafted so they could be “vague with who survived that bloody, bloody night [in the Season 2 finale].”

RELATED Hannibal‘s Hugh Dancy on Will and Lecter’s ‘True Love,’ the Possible Meaning of the Stag’s Death

DARLING CLARICE | Any possible Season 4 would enter Silence of the Lambs territory – though the rights to the property (and thus, Clarice Starling) belong to MGM. But you can rest (a little) easy, because Fuller plans to do “a full-court press” to get the rights. “Completion is an an important thing,” he added. “I want to complete the story.

A BROMANCE TO REMEMBER | Are Hannibal and Will googly-eyed for one another? “They have love for each other,” Fuller replied. “It’s not necessarily a sexual love, but they absolutely have a pure, genuine love for each other, which is why this situation becomes so complicated.” The EP then noted that fans have already taken care of a potential romance between the two men, referring to the abundance of slash fic on the internet. “The whole television show is fan fiction. What’s good for the gander is good for the goose.”

SONG-AND-DANCE MAN | “I would love to do a surreal musical number in Hannibal’s mindplace,” Fuller shared. He even has a vision of Mikkelsen swinging around like Christopher Walken in “Weapon of Choice.”

SLEEPING WITH THE ENEMY | If you’re wondering how Alana could get in bed with Hannibal, it’s simple: “When I’m in front of Mads Mikkelsen, everything’s easy,” Caroline Dhavernas explained. “The confidence and trust is very strong between [Alana and Hannibal]. Everyone else around her is behaving weirdly. He’s her rock. That’s why she can’t see [his betrayal].”

THANKSGIVING LEFTOVERS | Fuller on the victim in the horse: “In the writers room, we called it a Turducken.”