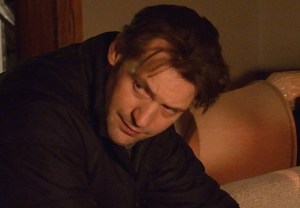 This week on FX’s The Strain, Eph feared the worst about someone close to him (and yet still made time for other feelings), while in flashback we saw two pivotal face-to-faces with the Master.

This week’s first stop for the Strigoibusters: The house where Eph’s ex-wife Kelly lives — just moments after son Zach was dropped off there by family friend Diane. Kelly’s infected beau Matt starts attacking wee Zach when Eph busts in and drives a silver blade into the vamp’s gut. Eph then uses a shovel to whale on Matt some more/take out deep-seated issues, then finally wedge off his melon.

While Eph and Nora hang back to clean up the scene/burn Matt’s body (with nothing remotely close to a eulogy), Setrakian, Vas and hacker Dutch Velders take Zach to safety at the pawn shop. (Along the way, they make a stop at Dutch’s, mainly to reveal that her “roomie” from the gas station mini-mart has stolen all her money and both her computers.)

Eph and Nora meanwhile use their alone time at the house to succumb to desires, in a heated, flailing romp whose clumsiness was only outdone by the scene that followed, when Diane walks in on them post-coitus. (There seemed little point for this super-awkward encounter, other than to have Eph state that he still “love[s]” the mother of his son in front of Nora.)

Back at the pawn shop, Setrakian A) gives Zach some “reading material” about the Strigoi (have fun with those nightmares, kiddo!), B) learns from Dutch that it was she who broke the Internet on behalf of the powerful Eldritch Palmer and the “plastic-faced” Thomas Eichorst, and C) gives Vas a pat on the back for his emotionless approach to their mission.

RELATED The Strain Renewed for Season 2 by FX

* Felix is not looking good at all there in the jail cell, but no amount of guff from Gus will get the bulls to bring in a doc. Rather, they tell the boys they’ll get any medical attention they need after their transport to Rikers. Mid-trip, Felix “Strigois out” on another jailbird, and then the van’s driver. This causes a crash, and ultimately turns Guard No. 2 into Felix’s next meal. Gus grabs the guard’s gun, puts his best friend to rest with a bullet to the bean, and then scampers away.

* In the latest stretch of flashbacks, we see Setrakian smuggle the silver knife into his bunk, ready to fend off the shadowy creature he has seen maul his comrades each night. Yet when the Master grabs Setrakian, he doesn’t kill him. Instead, he crushes the woodcarver’s hands. The next day, Herr Eichorst sees that “8230385” has been crippled, and as such sends him to face the latest firing squad. But before they pull their triggers, enemy fire interrupts, allowing Setrakian and others to escape. Later, we see Eichorst retreat to a bunker in the woods, where he apparently lights a tremendous amount of candles, circling the casket Setrakian made. Alone, sobbing, he asks, “Why have you forsaken me?!” — and the Master arrives. “I have done everything you have asked…. I am ready,” he tells the robed, gurgling, icky figure. The Master responds, “Then it is time.” The ghoul retracts his hood, revealing his not-pretty face, and proceeds to implant one of his worms into a slit in Eichort’s wrist — as they salute the “new order.”

What did you think of Episode 9 of The Strain? And who among you can best sum up who/what The Master, revealed looks like?