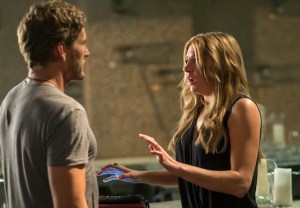 You can hate Josslyn Carver for (finally) succumbing to her feelings for ex-brother-in-law Harry on the Season 2 finale of Mistresses, but you’ve got to applaud her portrayer Jes Macallan for bringing humor and heartbreak, agony and (most definitely) ecstasy to a story arc that — without her deft performance — could’ve easily been dismissed as soap-opera cliché.

Macallan first had to capture her character’s utter shock when Harry — trying to make amends for their blowout fight the episode prior — declared there were “no words” to explain his actions and kissed Joss in a decidedly un-brotherly way. In the aftermath, while downing boilermakers and giving the play-by-play to pal Karen, Macallan never abandoned Joss’ delicious goofball streak, hilariously describing the smooch as “on the lips… on the mouth… in the mouth!” and allowing viewers a moment of levity before a hurricane of devastation arrived.

With nice-guy fiancé Scott’s ring on her finger, Joss returned to the scene of the lip-lock to tell her sister’s former hubby that she was quitting her job at Wunderbar — and quitting their too-close bond, as well. Tears streaking her face and voice crackling with emotion, Macallan made it palpable just how much her former party-gal character was sacrificing as she drew a line in the sand and a fortress around her heart: “We can’t be friends anymore, OK?” (Um, no, not OK!) It was, without question, the most emotionally gripping moment of the show’s 26-episode run.

Later, at her engagement party, you could sense Joss’ cleared conscience and newfound determination to make it work with her Scott — until he shared a selection of wedding gowns and noted there was a preacher on the premises. Just like that, the air began leaking from Joss’ chest, Macallan physically transforming her character from a mood of ease to one of eventual panic. By the time Joss discovered it was Harry who’d tipped off Scott to the meaning of her late father’s record collection, and Harry arrived on the scene and locked eyes with the bride-to-be on her second-floor balcony, it was clear how the season would end (though one might not have predicted Harry literally losing his shirt and Joss’ white gown getting some seriously ground-in sand stains).

What made the subsequent “runaway bride”/”forbidden embrace” moment so stirring, though, was the fact that Macallan and co-star Brett Tucker had been planting the seeds for ’em since at least as far back the Season 1 finale: their casual physicality, easy laughter, and moments of unexpected emotional intimacy made the shocking (and to some, unforgivable) combustion of their chemistry feel like a true payoff rather than a cheap cliffhanger gimmick. That’s not just the stuff of a terrific summer guilty-pleasure, that’s simply terrific television. HONORABLE MENTION | When Betsy Brandt made her Masters of Sex debut a few weeks back, it was easy to write off her bumbling, self-deprecating secretary Barbara Sanderson. She was ill-suited for a job in Masters’ office, and seemed relegated to a promiscuous relationship with Dr. Greathouse. But in the weeks since, Brandt has pulled back layer after heartbreaking layer of her character, culminating in Sunday’s episode, when Barbara unleashed repressed memories of an incestuous relationship with her brother that led to years of sexual dysfunction. As Barbara crumbled under the weight of her past “sins” — “God knew what we had done. And that is why He did this to me.” — our hearts felt just as heavy for a character that Brandt has made complex, flawed and completely human.

HONORABLE MENTION | When the truth about J.R.’s death was revealed on Monday’s Dallas — the cancer-stricken oil tycoon arranged for his own murder to frame nemesis Cliff Barnes — no one’s world was rocked quite as hard as Sue Ellen’s, and Linda Gray delivered a powerhouse performance as a woman coming to terms with her scheming ex-husband’s last lie. Her tear-stained journey was the ultimate (non-alcoholic) cocktail of shock, grief and, eventually, forgiveness, unquestionably inspired by her own three-decade working relationship with actor Larry Hagman. A stark contrast to J.R.’s funeral, in which the Ewing family patriarch was praised for his loyalty and sense of duty, this scene focused on the late philanderer’s darker truths; in a way, it was the perfect epilogue of J.R. and Sue Ellen’s tempestuous love story. HONORABLE MENTION | When Finding Carter‘s beloved best friend – and our favorite character – Max was shot in this Tuesday’s episode, there was only one response: crushing fear and tears, both of which the show’s star, Kathryn Prescott, delivered in spades. Holding a bleeding Max in her arms, Carter’s voice shook with terror as she dialed 911, sending panic through our own veins. Although our thoughts were with Max and his fate, we felt for Carter, too, as the pressure of the cops and her sister’s anger came crashing down on her, triggering an impressive display of waterworks and a trembling lip that would make Carrie Mathison proud.