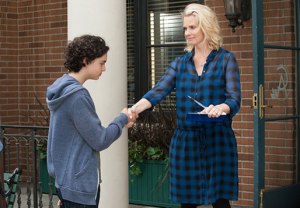 And now for something completely different: The first photos of Parenthood‘s final season don’t make us want to cry.

NBC has released a handful of snapshots from the dramedy’s Season 6 premiere (Sept. 25, 10/9c) and while the Braverman clan is showing off a range of emotions, the waterworks haven’t kicked in — yet.

Among the highlights: Kristina sharing a meaningful moment with Max, lovebirds Drew and Natalie doing a little remodeling — at Zeke and Camille’s new place, perhaps? — and Hank looking a bit apprehensive. (After all, some things never change.)

There are still plenty of faces missing from the photos, though, including estranged couple Joel and Julia, Sarah and (now-pregnant!) Amber. But considering the premiere is titled “Vegas,” perhaps we already know where the rest of the family has gone?

RELATED Are Joel and Julia Getting Divorced on Parenthood?

Regardless, we can be sure of one thing: The final season is going to be a doozy for the Bravermans (and us), as the last 13 episodes will introduce a challenge like the family hasn’t encountered before. “We’ve never told a story about losing someone in the family, and that is a very difficult story for us to tell. But it’s one that I feel is a reality,” creator Jason Katims previously told TVLine.

Click through our gallery below to see photos from the Season 6 premiere, then hit the comments with your hopes for Parenthood‘s final run.