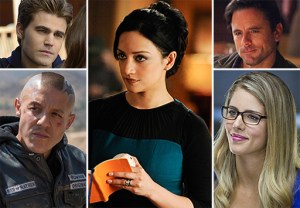 Question: Any Vampire Diaries scoop? Especially something about our favorite vampire, Caroline Forbes? —Chery
Ausiello: Oh, I’ve got Caroline scoop, and it’s juicy. Her romance with Stefan will become a major part of her Season 6 storyline, even if that romance isn’t exactly a two-way street. “She’s going to realize it’s a little more one-sided than she was hoping, and there’s going to be some fallout from that,” executive producer Caroline Dries says. “But just because one character doesn’t like another character, that doesn’t mean it’s not a fascinating love story.”

Question: Any news on Kalinda’s storyline for Season 6 of The Good Wife? —Eve
Ausiello: Archie Panjabi’s alter-ego will have “a stronger through-line” in Season 6, promises creator Robert King, “and after you’ve seen the first episode, I think you’ll understand why.” King is reluctant to spoil too many details, but he admits that the show’s writing staff felt that in Season 5, “we’d lost some of the fun people who we’d built around Kalinda.” To remedy that, King says we’ll be seeing return appearances by Jill Flint (dropping by from NBC’s The Night Shift as enigmatic FBI agent Lana Delaney) and Kelli Giddish (on loan from Law & Order: SVU as Kalinda’s married paramour Sophia Russo). BONUS SCOOP: Seeing how Season 6 picks up right after the events of last May’s finale, Kalinda and Cary will still be dealing with the “bombshell” that went off in their relationship (Cary overhearing Kalinda admit to Diane that she uses him for intel, and the occasional couple’s subsequent — and pretty uncomfortable — sex scene.) “The bottom line is, none of that is forgotten,” teases King. Now the question becomes how/if they’ll recover.

Question: I would love pretty much anything you can give me on Agents of S.H.I.E.L.D., as long as it’s not about romance/’shipping. —Joseph
Ausiello: When pressed by Matt Mitovich to tease the opening moments of Season 2, EP Jeff Bell ultimately said, “We come in in a surprising way,” adding: “Coulson was always interested in getting back to the roots of S.H.I.E.L.D., to the kind of organization it used to be — you know, this small, covert, ‘men in black’ kind of thing. And I think you get a feel for that when we come into the second season.”

Question: Do you have anything on Chicago Fire? I just watched Seasons 1 and 2 and am dying for it to start back up again! Any scoop? —Devin
Ausiello: How about a little Chicago Fire and Chicago P.D. scoop with a side of Law & Order: SVU intel? The Windy City-based sister shows will host a major crossover in the first half of the season, and then again in the second half. “We want to be as ambitious as we were last time,” says executive producer Matt Olmstead. “Last year, we also did a crossover with SVU that we liked a lot. We’re exploring a possible crossover with them as well. [We] definitely want to do at least one, perhaps two big crossovers, involving any combination of the three shows.” Question: Do you have any new scoops for The Big Bang Theory? —Aleksandra
Ausiello: Don’t expect Sheldon and Amy’s physical relationship to accelerate now that they’ve kissed. “We’re always moving them forward in baby steps,” shares showrunner Steve Molaro, who adds that there is no “set plan in place” for the pair to take their slow-burn romance to the next level. “They’re on the same trajectory that they’ve been on since they met, and that is she is continuing to drag him along into this relationship, whether he wants to admit that he likes it or or not. He’s come a long way. She’s got him to a place where they hold hands and they kiss and they go on regular dates. While it may not seem like a lot, it’s a colossal amount for him.”

Question: Do you have any Grimm scoop? –Lil
Ausiello:  Adalind and the royals will have some competition as they search for her missing daughter: The NBC drama’s upcoming fourth season will feature a “new character who will enter the fray who also really wants to find that baby,” series co-creator David Greenwalt tells TVLine.

Question: Who is Denis O’Hare playing in Banshee? —Hayley
Ausiello: The American Horror Story vet plays Robert Philips, an FBI agent who is sent to investigate Agent Racine’s disappearance. As of now he’s booked for one episode, but I have to imagine there will be more. It’s Denis O’Hare, for chrissakes!

Question: Any Juice-related Sons of Anarchy scoop? I’m worried about him. —Steve
Ausiello: You should be. As if covering up his part in last season’s double homicide wasn’t enough for the embattled SAMCRO-ian to contend with, series creator Kurt Sutter tells me that Juice will “have a revelation about himself” in Episode 6. “It’s somewhat sad, but it explains his journey and why he is doing what he is doing,” the EP adds. “He’s sort of on this path that begins with him having some glimmer of hope, and then when that doesn’t come to fruition, he’s just completely untethered and lost.” BONUS SCOOP: Juice isn’t gay. Just in case you were wondering. (I certainly was.)

Question: Please tell me Joel and Julia aren’t going to get divorced in Parenthood‘s final season. —Dakota
Ausiello: I would if I could but I can’t. Although the estranged couple had a fleeting moment of hope in the Season 5 finale, series creator Jason Katims says their troubles are not behind them. “I didn’t want to come back [this] season and have it feel like, ‘Oh, everything is fine, and they’re back to the way it was,’” he explains. “I feel like that would be cheating the audience out of watching what would really happen. We’re continuing to tell that story, and we pick up with them being separated.”

Question: Any cool intel on the upcoming season of Modern Family? —Frank
Ausiello: Co-showrunner Christopher Lloyd confirms that Adam Devine has signed on for six more episodes as Haley’s will-they-won’t-they love interest, Andy. “We really haven’t figured out that relationship yet,” Lloyd admits. “They don’t quite make sense on paper, but they do circle back to feeling something toward each other. They’re both trying to sort out what it is.”

Question: I just love Downton Abbey. Any scoop on Season 5 you can share, especially about Anna and Mr. Bates? Will our favorite downstairs couple finally get their happy ending? —Heather
Ausiello: I posed that same basic question to Joanne Froggatt on the Emmy red carpet last week, and I saved the video just for this very occasion. According to my calculations, that makes this an Ask Ausiello exclusive! Woo-hoo!

Question: Anything on The Blacklist? —Angel
Ausiello: Don’t hold your breath for an update on Liz’s “husband” when the NBC drama returns. When asked if we’ll get any clues about Tom’s whereabouts in the early part of Season 2, series creator Jon Bokenkamp would only say, “Nope!” Added the EP: “I do love that character, and it’s hard to imagine the show without him, but I don’t know what I could say to give any hope to Tom. There won’t be any big discoveries right away.”

Question: Any Nashville scoop on Deacon and Rayna? —Jessica
Ausiello: You already know that Deke will take notice of Luke’s new back-up singer, Pam — showrunner Dee Johnson elaborates that the enchanting chanteuse has “lived through a lot, and she’s come out the other side of it.” Yes, you’re saying, but what does this have to do with Deacon and Rayna?! Allow Johnson to finish. “But if you really look, on paper, Deacon has a pretty dark past, too,” she says, hinting that maybe Pam and Deacon will find plenty of reasons to spend time together in the season ahead. Question: Eva Longoria joining Brooklyn Nine-Nine really excites me. Can you spoil anything else about her role on the show? —Mia
Ausiello: Nothing beyond what we already reported. How about something on Kyra Sedgwick’s forthcoming B-99 guest stint instead? Co-showrunner Dan Goor confirms that her deputy police chief ties into the administrative shake-up in the Season 2 premiere. What’s more, Sedgwick’s character will take pleasure in watching Captain Holt suffer, seeing as how she’s his “longtime nemesis and equal who’s now risen above him, much to his chagrin.”

Question: Will Carol have a reaction to Daryl shrugging off Rick’s banishment of her on The Walking Dead? I’m bummed he wasn’t more pissed off, and I have to imagine Carol will be, too. —Charlie
Ausiello: Well, as showrunner Scott M. Gimple points out, “What Carol knows about how Daryl reacted is pretty limited because she wasn’t there.” That said, Carol’s estrangement and eventual return “does have weight” and “will be felt throughout the season,” Gimple adds. “It’s part of their history. And they haven’t seen each other since it’s happened. So there will be a catching up to that fact.”

Question: I’ve heard that Arrow is doing a Felicity-centric flashback episode called “Oracle.” I know it’ll touch on her time at MIT and casting news says her mom becomes a factor, but I’d like to know more about how Oracle ties into it. Can you dig up any teases? –Katie H.
Ausiello: For starters, the episode was recently retitled “The Secret Origin of Felicity Smoak,” so I’d take a wait-and-see approach as to how much DC Comics’ famous Oracle figures in at this point. As for casting NYPD Blue’s Charlotte Ross as Mama Smoak, Donna, “This is our first deep dive into Felicity’s character, so we knew we wanted to meet one of the parents,” showrunner Marc Guggenheim explains. “We felt both parents would be overload, and one might pull focus from the other.”