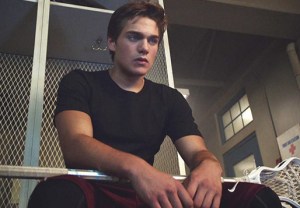 Kate and Peter’s master plan has always been a bit of a question mark — as have most things on Teen Wolf this season — but after Monday’s episode, I’m not even sure they know what they’re doing.

For starters, are they even working together anymore? They’ve seemed united thus far, but Peter requesting that Malia kill Kate in exchange for meeting her mother has me thinking otherwise. (Also, color me crazy, but is it at all possible that Kate could be Malia’s mom?)

Meanwhile, Kate appears to have her own agenda entirely, kidnapping Scott and turning him into one of her Berserkers. But which member of Scott’s pack is going to have the displeasure of facing him? My head is telling me Liam, but my heart is telling me Kira.

So, what was everyone else in Beacon Hills up to this week? Let’s check in… EYE, EYE, EYE | Deaton, who’s apparently way more badass than I was previously aware, delivered a stray wendigo to Eichen House in exchange for a little chat with a man whose gross third eye apparently has the power to reveal what Kate — who also goes by “la loba” and “the bone woman” — really did to poor, shirtless Derek. But because there’s always a supernatural catch, learning this info. sent the doc into a bit of a coma, which only Lydia could snap him out of.

PTS-DYLAN | And now for this week’s most adorable subplot: Liam is super-afraid of the dark. I mean, he has every right — those Berserkers would keep anyone up at night — but I just want to give him a nightlight and tuck him back in, bless his little heart. Liam’s PTSD is also putting a major kink in his lacrosse game; BFF Mason remains equal parts supportive and clueless. He received some surprising encouragement from long-time rival Brett, but it’ll still take a while for Liam to get back into fighting form. (Also, we’re not going to discuss that work-out scene, because Dylan Sprayberry is 16 years old. #NeverForget) SCIROMANCE | Scott and Kira had a rough go of things this week, but it wasn’t a total bust for the show’s current “it” couple, at least not initially. As TVLine teased earlier in the day, this week’s episode featured Scira’s long-awaited “first real date,” which Scott pulled off like a damn pro. (Seriously, a romantic lightbulb display at Chez Hale? Bravo, young alpha.)

STALIA | Stiles and Malia also got romantic this week, thanks to a generous donation from the Bank of Papa Stilinski. (Apparently Eichen House agreed not to charge him for his son’s stay; you know, your basic sorry-for-almost-getting-you-killed gift.)

Additional observations:
* Derek and Braeden should always carry guns, and never wear clothes. They delivered this show’s sexiest non-sex scene yet, hands down.
* We should probably talk about Deputy “Golden Eyes” Parrish. That was a fun scene.
* I’m enjoying Mason’s blind support for his best friend, but I’d enjoy it even more if they finally clued him in. (This is Danny all over again, and not in a good way.)

What did you think of this week’s episode? Are Peter and Kate really turning on each other? Could Kate be Malia’s mother? Drop a comment with your thoughts on all that and more below.