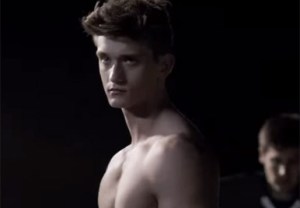 “As far as I know, he’s a bad boy with a good heart,” actor Cody Saintgnue tells TVLine. “He definitely has a hardness to him. We don’t know what happened to him before all of this, but I see him as very protective of the people he loves. He was rude to Liam because Liam demolished their coach’s car, so there was a loyalty element there.”

As for Mason’s throwaway line about being warm for Brett’s form — which, unfortunately, never ended up going anywhere — Saintgnue says he wouldn’t mind revisiting that: “You never know. Brett’s a new, fresh character, so there’s a lot of mystery to him. It’s definitely in the realm of possibility. … I wouldn’t mind it. I’m an actor and I’m not against anything. That would be a challenging role, but I’m open to playing it.”

And unlike some guest stars who come in blind, Saintgnue has a long history with Teen Wolf — and its star, Tyler Posey.

“I went to acting class for a long time with Tyler, and I always looked up to him,” Saintgnue recalls. “He took a break from the class for a while, and it turned out it was because he booked Teen Wolf. So I started watching it to support him, but then I realized I actually like the show; it’s amazing. So I was a huge fan before I even booked it.” Brett will be back on Monday’s episode, and Saintgnue believes it’s safe to give him a chance, assuring us he’s more than just a “snobby, dickish lacrosse player” (not that there’s anything wrong with that).

“I’d like to think he’ll be grateful to Scott and Kira for saving his life,” Saintgnue says. “That’s going to weigh out in some stuff that’ll be happening.”

Teen Wolf fans, your thoughts on Brett? Would you like to see more of him in Season 5? Drop a comment below.