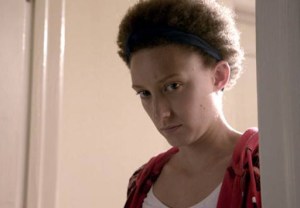 Lydia basically camped out at the police station on Soonday’s Teen Wolf, hoping to squeeze some info. out of Meredith — but she was thrown for a loop when Mer revealed she only wanted to talk to one person: Peter Hale!

In what might have been the weirdest televised interrogation ever, Meredith lightly stroked Peter’s face and told him they’d met before — and they had. It turns out Meredith was originally admitted to the same hospital as comatose burn-victim Peter, circa Season 1. She was hearing every thought in Peter’s head, and apparently he was thinking of only one thing: creating the dead pool and exterminating Beacon Hills’ extraneous supernaturals.

In another weird twist of fate, Meredith said Lydia’s screams after Allison’s death are what triggered her to launch the dead pool. (I guess that explains why Aiden and Allison’s names were both ciphers.)

TEAM STALIA | Thanks to a slightly absent-minded Melissa, Stiles and Malia were forced into an awkward reunion at the hospital. After begging her to forgive him, Malia finally buckled and went in for a kiss. The back-together couple then dove into a little detective work, determining that Lorraine’s tape was actually recorded at the lake house — not Eichen House — where they found the very machine being used to disseminate the dead pool.

With the help of an old wine bottle — Grandma Martin, you lush! — Stiles and Malia were able to terminate all of the Benefactor’s contracts, thus saving the day…ish. TURNING TABLES | Kira also returned to Beacon Hills this week, and not a moment too soon, as the remaining survivors of the Benefactor’s dead pool turned to Scott’s pack for refuge.

Braeden and Bushy Brows — excuse me, Braeden and Derek — were called in to prep the supes for battle, declaring revenge against any and all future assassins. Of course, they didn’t have much prep time before an army of hunters busted in the joint, guns a-blazing.

But we’re not out of the woods just yet, kids. The final moments of the episode revealed yet another shady underground conversation between Peter and Kate — and it sounds like Scott had better watch his back.

Were you surprised to learn that Peter (sort of) created the dead pool? Watch our interview with the Teen Wolf cast below, then drop a comment with your review of this week’s episode.