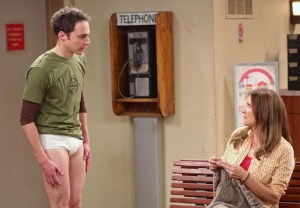 As a little aperitif three weeks before it uncorks Premiere Week , CBS has officially revealed the premiere loglines for several of its shows.

Which Big Bangers are hitting the road? Which crime drama is getting a Love touch? Which Five-0 pair is heading into therapy? Read on for the full rundown.

2 Broke Girls | Airing Monday, Oct. 27
“And The Reality Problem” – A reality show producer approaches Max and Caroline about shooting an episode of Keeping Up With The Kardashians at their cupcake window.

The Big Bang Theory | Monday, Sept. 22
“The Locomotion Interruption” – Leonard and Amy take an unexpected road trip to Arizona to pick up Sheldon. Meanwhile, Penny interviews for a job at Bernadette’s company and Howard is weirded out by Stuart’s relationship with Mrs. Wolowitz.

Blue Bloods | Friday, Sept. 26
“Partners” – As Danny and Baez escort confiscated drugs to a remote location for incineration, their convoy is attacked and Baez is seriously injured, leaving Danny to track down the drug cartel responsible. Meanwhile, Frank must carefully navigate personal and political waters when an exemplary lieutenant’s actions cause controversy for the NYPD.

CSI | Sunday, Sept. 28
“The CSI Effect” – Finlay must deal with a bomb planted in her car, while Russell gets a call from someone claiming to be the Gig Harbor killer “The Line” – Alicia is adamant in her refusal to run for State’s Attorney despite Eli’s attempts to persuade her to launch a campaign. Meanwhile, as Diane considers joining Florrick/Agos as partner, an internal crisis threatens to destroy the firm.

Hawaii Five-0 | Friday, Sept. 26
“A’ohe kahi e pe’e ai” – The island of O’ahu goes on lockdown when Five-0 hunts a terrorist who starts using weaponized drones on civilians. Meanwhile, McGarrett and Danno must go for a mandated review with a psychologist, resulting in a session which looks a lot like couples therapy.

NCIS | Tuesday, Sept. 23
“20 Clicks” – When Gibbs and McGee’s mission is compromised, the NCIS team races to locate them before a Russian mercenary group. “Deep Trouble, Pt. II” – Callen and Sam are trapped in an armed submarine that terrorists have aimed to hit an aircraft carrier in San Diego. Meanwhile, Hetty defies orders and forgoes her trip to Washington, as the team tries to locate and save Callen and Sam and prevent the terrorist attack.

Person of Interest | Tuesday, Sept. 23
“Panopticon” – Forced to take on new identities created by Root, the team tries to adapt to their new lives. However, some find it hard to ignore The Machine’s numbers, which puts them all at risk of being detected by Samaritan.