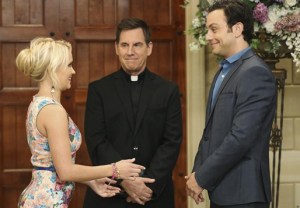 Josh’s wedding day finally arrives (early!) on Wednesday’s Young & Hungry finale (ABC Family, 8/7c), and star Emily Osment admits to TVLine that her character is “not exactly as ready as everybody else is for him to get married.”

After all, a ring on Josh’s finger would mean the end of his will-they-won’t-they (again) relationship with Gabi, which Osment hopes to explore in future seasons.

“Because Josh is a little older, and a little out of her league, being with him might mature her,” she says of Gabi. “That said, when you’re dating someone who’s so far ahead of you in life and in their career, it can also make the relationship unbalanced. I don’t know if Gabi’s necessarily ready for that, so I’m hoping we can expand her journey over a couple seasons so she can become the leading lady Josh needs and she deserves.”

But maybe she won’t have to worry about that. As with most TV weddings, Josh’s nuptials don’t exactly go as planned.

“There’s a huge cliffhanger moment in the episode,” Osment teases. “It was partially for us, and partially for ABC Family. Like, ‘Hey, don’t you want to know what happens next? We should have a second season!’ It truly does end with the most amazing cliffhanger.” Hypothetically, if Josh does tie the knot, there’s only one guy from Gabi’s past Osment would like to see back in the game: Jesse McCartney’s Cooper.

“We’ve made such a great story with Cooper,” she explains. “Jesse and Jonathan Sadowski have a history together, as do Jesse and I, and I feel like we have such a great chemistry, the three of us. He’s a completely opposite character from Josh, and it makes you wonder which guy would really be best for her. It would be great to have him back and to explore both relationships.”

Osment would also like to see Rex Lee’s Elliot find love in a potential Season 2 — and she’s already playing matchmaker.

“I’m hoping, and this is just my pipe dream, but I want Sean Hayes to guest-star so we can see a Rex Lee love story,” she says. “I’m such a big fan of Sean’s, and I think they’re friends, so I really think we should have him on. Why not? We haven’t given Rex anybody yet!”

How do you hope the Young & Hungry finale ends? Are you Team Josh or Team Cooper? Go ahead and drop your thoughts on the ABC Family comedy in a comment below.