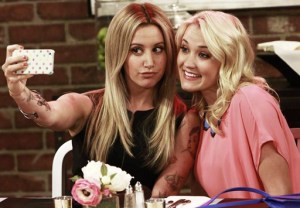 Prepare to see Ashley Tisdale like you’ve never seen her before.

The executive producer of ABC Family’s Young & Hungry is stepping in front of the camera on this week’s episode (Wednesday, 8/7c), playing a surprise love interest for Emily Osment’s Gabi Diamond. Of course, the real surprise comes when Tisdale’s Logan learns that Gabi isn’t a lesbian.

Below, Tisdale tells TVLine about her bold new role — and why we shouldn’t hold our collective breath for a High School Musical reunion.

TVLINE | So, what’s Logan hungry for?
She’s hungry for the very cute Gabi. She’s a magazine editor who’s there to interview Jonathan, but she ends up taking a quick liking to Gabi.

TVLINE | Have you always wanted to play a gay character, or did this just sort of happen?
I produce the show, so it was really fun to be able to get creative with [creator] David Holden. We had all different types of characters, and I said, “You know what? For me right now, I just want to play things super different and push things out of my comfort zone.” That’s something I’ve never done before, and it was cool. I love being able to do things that are different from what people have seen me do in the past. TVLINE | Those tattoos alone are a huge departure from what we’re used to seeing.
[Laughs] They put them on for pre-shooting on Thursday, and then Friday we bring in the live audience. They were pretty good — like, they wouldn’t come off in the shower — and I went to Pilates the next morning, and my teacher was like, “When did you get an arm of tattoos?!” I was like, “It’s fake! It’s fake!”

TVLINE | For those who may not know, how much involvement do you have as an executive producer?
As an executive producer, I’m involved with everything from casting to character development to wardrobe — which is always my favorite — so it’s really cool. I’ve produced a reality show in the past, but this is my first sitcom, and I can’t even explain the feeling of seeing everything come together. Watching the premiere a few weeks ago was amazing.

TVLINE | Is this the first time you’ve acted in front of an audience since The Suite Life ended?
Almost. I was actually in a pilot this year that got picked up by TBS called Buzzy’s, and that has a studio audience.

TVLINE | Do you prefer that to single-camera work?
Well, with this, you get the immediate gratification of them laughing. I’ve done some single-camera stuff this year, and you never know if it’s funny or not. I’m always like, “Was that funny? Am I funny?” You don’t know, so it’s awesome to hear the audience’s reaction. It reminds me of theater growing up; it feels great to finally get that laugh.

TVLINE | And how was it acting opposite Emily Osment, a fellow former Disney Channel girl?
For the past couple of years, I’d see Emily at auditions for pilots and stuff, and I always thought she was the sweetest girl. We definitely didn’t know each other while doing Disney because I’m a couple years older than her; Hannah Montana came after [High School Musical and The Suite Life]. But I always thought she was the sweetest girl, and when I saw her name on the list while we were casting her part, I was like, “Oh my God. She is so perfect for this part!” She’s brilliant and funny and it’s been so great working with her. TVLINE | Speaking of Disney Channel, they just aired a High School Musical marathon this weekend. Would you ever consider revisiting Sharpay Evans, or do you feel like you’ve left her behind?
I feel like I’ve left her behind. I did the extra movie, Sharpay’s Fabulous Adventure, on top of the Musical stuff, so I just feel at this point … For me, as an actress, it was such a great experience, but at the same time, a lot of people only see me as that character. I really want to start doing things where people say, “Oh, wow! She really can play other types of characters.” It’s awesome that everyone loves me as that character, but I kind of want to venture out — and more mature stuff, too.

TVLINE | Well, this is definitely a step in that direction.
[Laughs] Definitely.