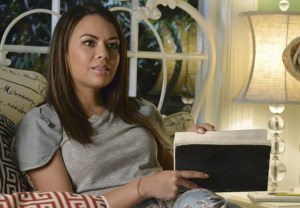 Dry your tears, Pretty Little Liars fans, because the victim of Tuesday’s fatal finale tells TVLine that she’s not going anywhere. In fact, she’s “excited for this new twist” on her character.

“Basically, as Alison was the flashback girl for the past three seasons, it will now be [Mona],” Janel Parrish tells us. “I think it’s great! Even though Alison was ‘dead’ for the first three seasons, you found out everything about her through flashbacks, and now that’ll be happening through Mona.”

Read on for more scoop from Parrish, including what Mona will be up to in the Christmas special and what really happened during her fatal scuffle with that mysterious blonde.

TVLINE | I’m bummed about Mona’s death, but does the fact that was sort of redeemed make it easier?
It does, and I think that’s also what makes her death so devastating. She finally earned people’s trust, not only the girls’ but also the fans’. She finally came through for everyone … and then she died.

TVLINE | We didn’t see the attack itself. Was there a plan to show more?
Actually, more will be seen of the fight. Mona did not go out without a struggle, and I’m very proud of her for that. If I could have chosen the way she died, it would have been that way — her fighting till her last breath. TVLINE | Alison seemed more than a little pleased. Can you say anything about her next move?
Mmhmm, that smug smile. It definitely looks like she killed Mona, and more will unfold as time goes on. But for now, yeah, it looks like Alison did it.

TVLINE | The scene with you in the trunk probably gave some viewers nightmares. What was it like playing dead?
That was really creepy, huh? Honestly, most of it was just me trying really hard not to blink. That’s what was going through my head the whole time: “Don’t blink! Don’t blink!”

TVLINE | Since we’re seeing her in flashbacks, what else is there to tell?
It’ll be satisfying for fans to get more information about Mona, since she’s been such a mystery. It’ll be good to see some backstory as far as she’s concerned.

TVLINE | So you’re still a series regular?
Yup! I’m still going to be a regular, just in a different way.

TVLINE | Will we see her in the Christmas episode?
Oh, yes, she’s going to have a fun part. She’s going to be the Ghost of Christmas Past, Present and Future. She gets to mess with Alison, and in a fabulous costume, I might add.

PLL fans, are you glad Mona will be sticking around in ghost/flashback form? And who do you think killed her? Drop a comment with your theories below.