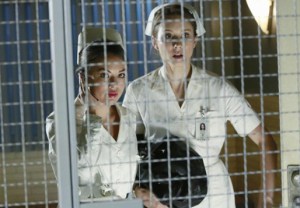 Pretty Little Liars has been promising a “fatal” summer finale for weeks, and on Tuesday, it finally delivered — big time.

The victim, as many suspected, ended up being poor Mona Vanderwaal, who was brutally murdered at her home by a mysterious (and seemingly blonde) assailant. Fortunately, Mona was able to call Aria first to inform her that Alison lured Bethany to Rosewood in the first place.

But let’s back up a bit…

The nail-biting hour began with a massive switcheroo: Not only did the girls join Team Mona, but Alison convinced all of Mona’s cronies to join her social army. After learning that Spencer is now the prime suspect in Bethany’s murder, Team Mona paid one last trip to Radley Sanitarium, where it all began.

Even with Hanna at the helm — she’s probably the last person I’d put on computer duty — Operation: Radley was proceeding according to plan… until Detective Holbrook showed up with plenty of questions for Aria.

Meanwhile, Mona and Spencer discovered that Mrs. DiLaurentis was having an affair with Bethany’s father and Alison knew Bethany. And while this discovery was a major coup for Team Mona, the gang barely had time to celebrate because Toby got into a car accident! (This finale, I swear.)

The good times kept a-comin’ the next day at the café when Paige revealed that Alison was building army and Spencer was arrested for Bethany’s murder!

PAILY | “Tired of talking,” Paige and Emily decided to bury the hatchet — and they sealed their reunion with a kiss! They continued their newly rekindled flirtationship by hanging Christmas decorations at Emily’s house, where we learned that Christmas is Emily’s favorite holiday. (Let’s see if she still feels that way after “A” plays Bad Santa this December.)

EZRIA | Another seemingly back-together couple was Aria and Ezra, who cooked up some very sexy pies following Ezra’s invitation to Thanksgiving at Chez Montgomery.

Were you shocked by Mona’s (apparent) death? Who do you think is responsible? Drop a comment with your thoughts on the “fatal finale” below.