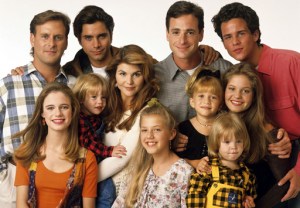 Wondering what the Full House gang is up to, 20 years after the ABC sitcom wrapped its eight-season run? You might be getting your answer sooner than you think.

A revival of the classic comedy is currently in the works, according to a report from TVGuide.com, with several of the show’s original producers and cast members attached. John Stamos (Jesse), Candace Cameron Bure (D.J.), Jodie Sweetin (Stephanie) and Andrea Barber (Kimmy) are all reportedly game for the new series, while Bob Saget (Danny) and Dave Coulier (Joey) have also shown interest.

The project would be written for Warner Bros. Television by Full House creator Jeff Franklin, who would be joined by original executive producer Bob Boyett.

To be fair, this isn’t a complete surprise. Much of the cast — save for Mary-Kate and Ashley Olsen, who have been busy running their fashion empire or solving mysteries or whatever — have staged televised reunions over the years, including a memorable 2014 Tonight Show skit in which Bob Saget, Dave Coulier and John Stamos reprised their Full House roles for a performance of “Teddy Bear”:

And who could forget when Lori Loughlin locked lips with former TV husband Stamos (in-character with Jesse and the Rippers) on Late Night in 2013?

OK, time to weigh in: Do you think a Full House reunion is a good idea? While some revivals have fared well in recent years — Girl Meets World, Hawaii Five-0, Dallas and even 90210 — there have also been plenty of flops. (Bury my heart at Melrose Place.) Drop a comment with your thoughts on the Tanners’ potential comeback below.