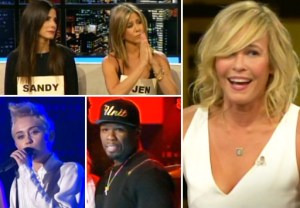 Truly a vision in white, Chelsea Handler was met with a standing ovation at the top of Tuesday’s awkward, emotional — and, most dangerously, live — final episode of E!’s Chelsea Lately.

“Tonight, we’re wrapping up seven years of stupidity, and I am very impressed with myself,” the hostess began. “The only other time I spent seven years in one place was high school.”

And now, for a rundown of the final hour’s biggest — and surprisingly star-studded — moments:

* Ellen DeGeneres stopped by for the show’s final shower bit, in which Handler tried to convince her that she’s a lesbian. (Spoiler alert: It did not work.)

* Handler thanked her regular stable of guest comedians, whom she brought out one last time — categorized by race and mental stability, naturally.

* Mary McCormack, Jennifer Aniston and Sandra Bullock staged an intervention, explaining how each of their lives has nosedived since becoming friends with Handler. They also joked that “Netflix” was code for rehab, and that everyone supports her decision to go.

* Handler’s ex 50 Cent also dropped by, escorted by Bullock, which was a pretty ridiculous sight to see.

* Did anyone else get strangely choked up during that Chuy retrospective? The sight of a tiny man floating through outer space in a bikini really packs a punch.

* A performance by Miley Cyrus, singing Roy Orbison’s “It’s Over”? Sure, why not?

What did you think of Handler’s last hurrah? Browse our gallery of memorable moments, then drop a comment with your review. (Plus, will you follow her to Netflix?) 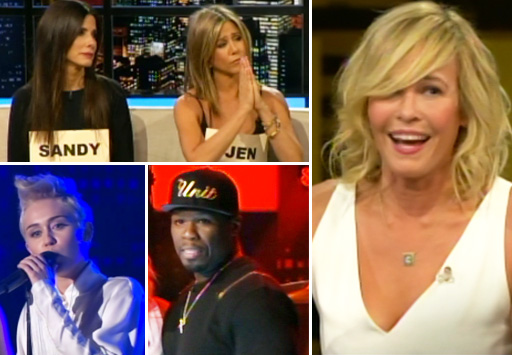