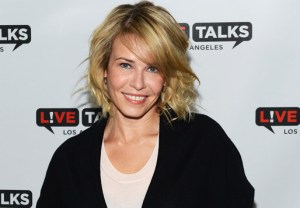 Netflix is getting into the talk show game and Chelsea Handler is leading the charge.

The streaming giant announced Thursday that it has signed E!’s departing late-night provocateur to a multi-year deal that includes a brand new talk show (to launch in early 2016).

Per Netflix, the currently-untitled show will “feature an updated format that still encompasses Chelsea’s unfiltered opinions on topical entertainment and cultural issues, as well as her signature guest interviews.”

The deal also calls for Handler to headline a stand-up comedy special as well as four docu-comedy specials “featuring her efforts to gain a better understanding on a variety of subjects ranging from NASCAR to politics and from Silicon Valley to the NBA draft.”

“If I was going to continue working in this industry, I knew I had to do something outside the box to keep myself interested,” Handler said in a statement. “I wanted to sit with the cool kids at lunch so I approached Netflix to make sure they were as cool as I thought they were, and when I confirmed my suspicions, like with any other future lover, I made my move. I’m more excited than I’ve been in awhile, and the team at Netflix is the most forward thinking, alert group I’ve sat down with in ages. No offense to the Shahs Of Sunset.”

Added Netflix Chief Content Officer Ted Sarandos: “The Internet has disrupted many of the conventions of traditional television and together with Chelsea Handler, Netflix is looking forward to reimagining the late night talk show for the on-demand generation.” (The headline of Netflix’s release was even more bullish, promising Handler’s new series will “revolutionize the talk show.”)

In May, Handler officially announced that she was ending her seven-year gig as host of E!’s Chelsea Lately. An hour-long series finale is set to air on Tuesday, August 26.