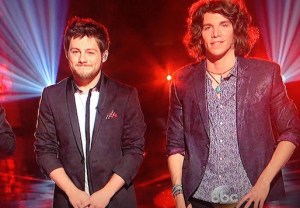 “Mr. Groban, tear down this wall!”

Trust me, I’m as surprised as anybody that I’ve managed to rework a famous quote from President Ronald Reagan into an intro for a reality TV recap. But just as the Berlin Wall fueled The Gipper’s ire, so too has ABC’s Rising Star — with its cumbersome “interactive wall” setup, questionable casting and tiresome “experts” — threatened the sanctity of my love for singing competitions.

It’s a shame, really. The idea of using a smartphone app to vote — and getting real-time results by the end of every performance — was kind of cool, at least on paper. But as easy as it would be to blame Kesha and her “I just huffed paint fumes” brand of critique for Rising Star‘s failure, the real issue is that the show’s producers forgot the cardinal rule of any good talent show: “It’s the contestants, stupid!”

In other words, when three-quarters (or more) of Rising Star‘s semifinalists wouldn’t have made it past The Voice‘s blind auditions or American Idol‘s Hollywood Week, you’re not going to achieve any kind of (positive) water-cooler buzz.

RELATED Emmys 2014: We Pick Who Should and Will Win — Plus: Reader Poll Results!

And so, with Season 1 in the books, the only way I can imagine ABC bringing Rising Star back for 2015 would be by embracing its Sharknado camp potential. I’m envisioning a tagline like, “If you thought The X Factor was terrible, just wait ’til you hear Kesha tell another deluded shrieker that she luvvvvvvs ’em!”

Before the idea of Season 2 sends you into the emotional fetal position, let’s get to recapping the Season 1 finale festivities. Host Josh Groban explained that producers had seeded the final four — Jesse Kinch, Austin French, Audrey Kate Geiger and Dana Williams — based on season-long voting tallies (without actually telling us who was seeded where). Here’s how Round 1 played out:

Dana Williams, “At Last” — Grade: C+
vs.
Jesse Kinch, “Fortunate Son” — Grade: B
Jesse wins with 87% “up” votes over Dana (with 30%). Yeah, the season-long front-runner essentially screamed his way through CCR’s classic — how come Brad Paisley didn’t talk about dynamics during their mentoring session! — but Dana’s tone proved way too wispy and her approach way too tentative for the iconic (and oft-covered) Etta James love song.

Austin French, “In Love With a Girl” — Grade: C+
vs.
Audrey Kate Geiger, “Love Me Like a Man” — Grade: C+
Austin wins with 70% “up votes over Audrey Kate (with 44%). This one was a draw for me. Both of ’em can sing (mostly) in tune, so it comes down to which you find less egregious: Austin’s complete and utter absence of soul or Audrey Kate’s ridiculous, old-timey enunciation.

And then it was time for the final showdown:

Jesse Kinch, “Love Reign O’er Me” — Grade: C
vs
Austin French, “God Bless the Broken Road” — Grade: C+
Despite an opening third that was peppered with flat notes and one really embarrassing voice-break, Jesse takes home the Season 1 title — 76% to 61%! Clearly, the audience was voting more on the basis of “body of work over the past two months” than on the final-round vocals. Austin, despite rushed phrasing and insipid “I’m feelin it!” hand gestures and squints, definitely hit more notes per minute in his Rascal Flatts cover. But if I’d bothered to vote, I’d have gone #TeamJesse, too, so… yay?

After Jesse got the good news, his family, the judges and dozens of former contestants swarmed the stage, leaving our host unable to find the champ for a victory interview. “Jesse is lost in a sea of contestants!” Josh exclaimed. For the sake of the growling retro rocker, here’s hoping that statement doesn’t become a prophecy for his post-show music career.

What did you think of Rising Star‘s maiden voyage? How did the finale sit with you? And did the right person win? Take our poll below, then sound off in the comments!