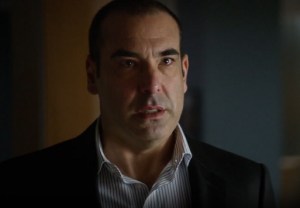 THE EPISODE | “This Is Rome”

THE PERFORMANCE | It’s fitting that Louis Litt’s catchphrase is “Litt Up” because on Wednesday’s season finale of Suits, his portrayer, Rick Hoffman, set our televisions ablaze with his fiery passion.

After learning that his colleagues had been lying to him about Mike’s non-existent Harvard degree, Louis confronted the one person who he thought was his close friend. “You acted like you cared about me,” he exclaimed to Donna, his eyes watering. “You didn’t give a s–t about me! You cared about you. And Harvey. And Mike. And Jessica.”

Hoffman brought an unbridled rage, fueled by hurt and years of betrayal, to the exchange. But beneath the terrifyingly powerful anger — which frightened even the steely Donna — was an extreme sense of sadness. “I knew Harvey and Jessica never really accepted me, but I thought you were different,” Louis continued, solemnly. “I thought you were my friend.”

Then he went on to have a heated face-to-face with his former boss Jessica, showing off a confidence and bravado rarely seen in the oft overlooked lawyer. His demands were loud and clear and laced with a bit of venom. But it’s when Louis revealed what he really desired that Hoffman truly wowed.

“Pearson. Specter. Litt,” he declared, his lips trembled as if overcome by his own strength. No doubt about it, Hoffman “litt up” the finale. HONORABLE MENTION | At first, he roared. As The Bridge’s Lt. Hank Wade, Ted Levine popped like never before on the FX drama, charging at Jack Dobbs upon realizing that he years ago could have shared his suspicions about his murderous brother Jim, and thus kept him from subsequently targeting Lisa Cross. “[Sonya’s] sister would be alive today… Thats on you, Jack,” he growled. But then Hank’s own dark truth came out — that back then when he tracked down and exacted vengeance on Jim, his prey was unarmed, contrary to the official report he filed — and he bowed his head in shame, seeing that Sonya’s regard for him had been shattered. “Knowing what that sonuvabitch did to Lisa, did to you… I knew what I had to do,” he quietly argued, capping a performance that brought rich new colors to Levine’s heretofore righteous lawman.

HONORABLE MENTION | Throughout this first season of The Leftovers, Ann Dowd’s work as Mapleton’s Guilty Remnant ringleader, Patti, has left us as speechless as the character usually is. No matter if the cult leader’s just been staring daggers or breaking her vow of silence to utter apocalyptic BS with absolute conviction, her portrayer has made her pathetic, infuriating and scary as hell. And, in her final episode, “Cairo,” the actress really went for broke, throwing herself into Patti’s poetic last monologue so wholeheartedly that it was impossible to say whether we were witnessing true faith or real madness (or both!). In either case, we sure witnessed one amazing swan song.