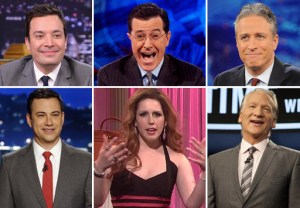 The streak is over!

After 10 consecutive Emmy wins for Outstanding Variety, Music or Comedy Series, The Daily Show with Jon Stewart finally got upended in 2013 by its Comedy Central cohort The Colbert Report (which took home the statuette on its eighth attempt).

RELATED Emmys: Who Should Win Supporting Actor in a Miniseries or Movie?

While 2014 could certainly provide Emmy obsessives with another Stewart-Vs.-Colbert showdown, there are two other veterans in the race hoping to break on through to the podium: Jimmy Kimmel Live (in the race for the third straight year) and Real Time with Bill Maher (now on its 10th consecutive nomination).

Rounding out the field? Newcomer The Tonight Show Starring Jimmy Fallon (whose host previously competed in the category in 2011-2013 as part of Late Night with Jimmy Fallon) and Saturday Night Live (a winner in the race in 1976 and 1993).

And stay tuned to TVLine all weekend through Monday night for the best Emmy coverage on the Internet!