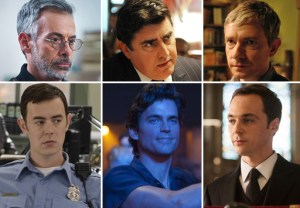 It’s business as Normal when it comes to the 2014 Emmy race for Outstanding Supporting Actor in a Miniseries or Movie.

Indeed, four of the six men in the race — Jim Parsons, Joe Mantello, Alfred Molina and Matt Bomer — hail from HBO’s adaptation of The Normal Heart.

RELATED Emmys: Who Should Win Supporting Actress in a Miniseries or Movie?

If this year’s champ doesn’t have Heart, the statuette will either go to Fargo‘s Colin Hanks or Sherlock: His Last Vow‘s Martin Freeman.

What would you do if you had the power to honor one of these fine talents when the Emmys are handed out on Aug. 25? Take our poll below to vote for your favorite, then hit the comments to justify your pick!