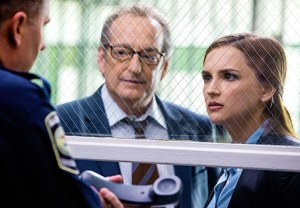 Once a cheater, always a cheater?

TVLine caught up with Rachael Leigh Cook — who plays the special agent in question — to talk about Kate’s relationship with Donnie (Scott Wolf), his political campaign and her feelings for a certain psychology professor (Eric McCormack’s Daniel).

TVLINE | How big a role will Donnie’s campaign play in the summer finale?
Donnie seems like a natural fit for office, but there are some pretty major obstacles about to come up. Let’s just say his campaign path is compromised by a sudden turn of events that seem like they’re beyond his control, but maybe are also his fault.

TVLINE | Kate’s a very private person. How is the campaign going to affect her?
She has a major issue with his very pretty campaign manager. She’s extremely jealous of her, and it’s definitely bringing back old feelings Kate had from years ago, when Donnie stepped out on her with her best friend. TVLINE | As we’ve seen, Kate and Donnie both want different things for their future. Are they going to have a heart-t0-heart about that?
Kate and Donnie are people who don’t really want to look at the past. They really don’t want to look at the situation realistically either, because they clearly want different things and they both obviously had a difficult road behind them. They’re a little bit deluded going forward, thinking that everything can be okay. I hope they talk about it, but it seems like they’re pretty squarely set on ignoring it for now.

TVLINE | The fact that she’s even considering marrying Donnie is such a big step for Kate.
She’s definitely grown. [She’s] someone who, with the exception of seeing cases and suspects through Daniel’s eyes, views things as pretty black and white:  You’re guilty or you’re not guilty, you’re a good person or a bad person. She was convinced Donnie was bad, [but] then he really saved her hide in Season 2 and completely redeemed himself. Now he’s back in good standing with her. She just wants to see that. She’s not good at seeing the in-between.

TVLINE | Lately, Daniel’s been rethinking his feelings for Kate. Is she beginning to think about him romantically?
They have both definitely entertained romantic notions about one another, but it’s like they say, “Timing is everything.” Kate has thrown herself into her relationship with Donnie and into her career, as usual. Between the two, she hasn’t had much time [to figure out] how she might really feel about Daniel. She’s made herself stamp out any romantic notions she may have had towards Daniel. It’s always going to be there on the level, [but] it’s pretty far below the surface at this point.

TVLINE | Are there any big cases coming up for Kate in the summer finale or in the four remaining episodes slated for this winter?
[This next one] is a big episode for her emotionally, because her loyalty to Donnie is definitely called into question… She’s put in a position where she doesn’t know what to believe anymore about Donnie, and she does question him and his character for a moment.

What are your hopes for Perception‘s summer finale? Drop a comment with your thoughts below.