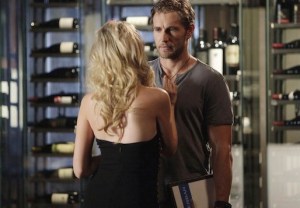 Being one of ABC’s Mistresses isn’t as easy-breezy as a stroll through the candle section at Maison Sur Mer.

I mean, imagine getting an unexpected marriage proposal from a bronzed, swoon-inducing, ridiculously sweet M.D., then heading to lunch with your three closest gal-pals and finding yourself stuck at No. 4 on the list of most gasp-inducing conversation-starters?

Such is the plight of poor Joss, whose sister Savi is caught up in a high-stakes game of “Pin the Blackmail on the Bitchface,” while buddy April discovers her presumed-married boyfriend is actually single (but also an FBI agent investigating the whereabouts of her presumed-dead hubby) and friend Karen decides to abandon a fruitful psychiatric practice for a foray into the world’s oldest profession.

OK, OK, so Dr. Kim didn’t exactly say she was going the Pretty Woman route — but with all those wigs and cocktail dresses in her California Closet, you have to admit this would be a logical (and definitely not dull) direction for Season 3, yes?

I know, I know… you’re all like, “Slezak, don’t quit your day job, buddy.” So let me do what I do and recap the “Choices” episode of Mistresses, while raising key questions for each of our central chicas.

APRIL | Our exasperated single mother reacts to the sight of Daniel at FBI HQ (in an FBI windbreaker) by placing an open palm against his cheek — with all the brutality her petite-yet-toned arms can muster. He comes to her home and is all, “Yes, I crossed a line by dipping your naked body in acrylic paint while also wiretapping your little girl’s bedroom and investigating your drug-dealing ex’s shady death, but I still heart you big-time.” April — thank heavens! — is not having it, but she soon learns that while she doesn’t have to cooperate with the temptation of Daniel’s smoking hot torso, she does have to work with the Feds (or else pay back Paul’s life insurance money and serve jail time). The episode ends with her getting a burner phone in the mail programmed with Paul’s number — featuring an Ohio area code! — but surely she’s not thinking of keeping this intel to herself, right?

Key Questions | Just because April’s mad at Daniel doesn’t mean she owes Paul a damn thing, right? Under her modus operandi of “Put Lucy First,” is there any way April’s first call isn’t to the FBI? Also: Is there any scenario under which you’d “paint an abstract piece” (definitely a euphemism) with Daniel again after his insane levels of lies and deception?

SAVI (PLUS HER MERRY BAND OF OVERSIZED PILLOWS AND HANDBAGS) | Savi surreptitiously helps Dom defeat Toni Tanned and Treacherous, with the two of them staging a humiliating office fight that causes She of the Plunging Necklines to let down her guard and let her officemate in on her secrets: Use bogus sexual harassment charges to get that money. “Rich will look really good on you,” coos Toni, who clearly hasn’t seen the size of Savi’s kitchen. Naturally, Savannah’s got the whole conversation on tape, but instead of firing the Wicked Witch of the Minidress, Dom decides to keep her on as an associate. One of their richest clients won’t work with anyone else — and anyway, he thinks she’s actually good at her job. Savi, meanwhile, calls Zack — who has taken on the form of a buff, grease-streaked mechanic from a mid 1980s rock video — to share that while her house is off the market, she’s back on. Thus, a dinner date is scheduled.

Key Questions | Is Dom out of his freakin’ mind? I mean, this is the equivalent of a chipmunk inviting a hawk to run out to a freshly mowed field for a game of dive and duck! Also: Is there a Mistresses fan alive who feels like there’s magic in the Savi-Zack matchup? Or is he just bad news riding in on the back of a motorcycle? (I vote the latter.)

JOSS | Scott surprises Joss with an engagement present — replacing her coffee with Folger’s Crystals and her beat-up vehicle with a brand-new Tesla — but it turns out our “Independent Woman” (Trademark: Destiny’s Child) wants to pay her own automobills. The extravagant gift makes Joss feel like she’s going to lose her identity — and so she rashly asks for a prenup. A brief night of tension follows for the ridiculously handsome couple, until Scott emerges from the shower, glistening in a low riding towel. (You think I can’t remember anything that happened after that scene? Think again! I take notes!) Scott adorably hashes out a makeshift marital agreement — Joss must pay the cable and phone bills ’til death do them part, their (two) babies will bear both of their surnames, and their sex life must remain unspeakably hot. (Clearly, this duo has never suffered from infant-induced exhaustion). Everyone winds up happy-happy, joy-joy in this storyline — except for Harry, who looks positively stricken at the sight of Joss’s engagement ring, and promptly reacts by sleeping with crazy bosslady Greta. Has anyone in the history of ever looked so unhappy to have sex with a supermodel?

Key Questions | Who’s feeling more and more like Scott and Joss are actually an amazing couple who might just make it work? And is it just me, or is there something horribly unsexy about broken wine glasses during intercourse? (#GetABroom #ProtectYourTendersPeople) Lastly, who feels like Harry needs more outdoor scenes? He’s been cooped up in his home/Wunderbar altogether too much this season!

KAREN | Our dubious psychiatrist takes one step forward — reconnecting her giddy-imbalanced former patient/new roomie Anna with her family in Korea, then putting her on a one-way plane back to her homeland — and then makes a stunning announcement to her friends: THIS IS THE FIRST TIME IN HER CAREER SHE FEELS SHE’S MADE A DIFFERENCE IN A PATIENT’S LIFE. (And yet her meticulously appointed apartment tells me there are loads of wealthies who’ve paid her handsomely for truly disappointing life advice!) Meanwhile, Jacob gets a job at my alma mater, Boston University, and invites Karen to move with him to the east coast (and, sadly, leaves his shirt off the entire duration of the conversation). Karen decides to A. Give up psychiatry. B. Stay in California with her family (Savi, Joss, April and the Apple Tart at Maison Sur Mer — awww!) and C. Find a new path in life (which will hopefully pay her enough to avoid foreclosure).

Key Questions | Does Jacob’s move clear the way for the return of Earthquake Sex Guy? Are we sure Anna is out of Karen’s life? (I still feel like that chick is going to go full Single Asian Female on our hapless Dr. Kim!)

UPDATE: My ABC screener for Episode 11 omitted the final scene — Ben (aka Earthquake Sex Guy) showing up at Karen’s door, looking all sweaty and scared and saying, “I need to talk to you about something.” THIS CANNOT BE GOOD!!!! ALSO: AM I PSYCHIC? Because as soon as Jacob was out of the picture, my thoughts turned to the long-lost hotel hookup!

Your turn. What did you think of this week’s episode? What seems crazier: Dom letting Toni stay at the firm or Karen giving up her career? Which couple seems more ill-suited: Savi-Zack or Harry-Greta? And Oh Em Eff Gee — what about Justin Hartley’s chest?! Hit the comments with your thoughts!