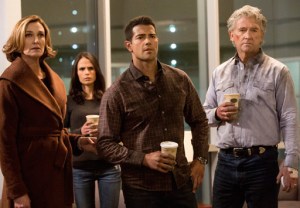 No bridge was left unburnt after Monday’s Dallas midseason premiere, and executive producer Cynthia Cidre tells TVLine that we ain’t seen nothin’ yet.

A quick recap of the hour: Judith told Bobby about Ann and Harris’ kiss, prompting him to kick his wife out of their house; Emma was also given the boot from Southfork following the release of her and John Ross’ home movie; Pamela survived her overdose, promising to make John Ross’ life miserable; Elena lashed out at Nicolas for sending the video to Pamela; Sue Ellen accepted blame for the fire, even though it was actually started by Drew; and in the episode’s final moments, Nicolas watched as Drew was shot and killed by a member of the cartel.

Whew. Still with me? OK, good.

Below, Cidre previews the drama to come, including which couples will be keeping the faith — and which will remain at each other’s throats.

TVLINE | Let’s start with Bobby and Ann. Any hope for those two now that he knows she kissed Harris?
They’re going to be on a rocky road for a while, which will turn out well… eventually. I think they love each other, and I really do mean for them to be good together. They’re attractive, virile people and they should continue having sexual conflicts.

TVLINE | I imagine Bobby’s wrath will also extend to Harris, as it takes two to tango?
It does and it does. Things will only get worse between them. TVLINE | That whole secret came out thanks to Judith, who I remain obsessed with. Will she have a big part in the second half of the season?
Actually, Judith has a lot of stuff coming up. You’re going to see a different color to Judith. She’s always so big and over-the-top, but a lot of bad things are going to happen to Emma, and you’ll see Judith break down. She loves Emma; that’s a genuine thing she feels. As for Emma, she’ll recover from what happens to her, but let’s just say that some of the bad things she’s done [will come back to haunt her].

TVLINE | Over to Nicolas and Elena, how will their relationship suffer now that she knows he sent the video to Pamela?
The relationship will definitely suffer. He continues to pursue her, and it gets worse, believe me. She’ll find out some of what he’s up to, of course, which will land them both in danger. She wants no part of him in a very real way, but he won’t take no for an answer. Some very bad things happen between them, but it all leads to a very delicious season finale for them.

TVLINE | Sue Ellen also seems pretty over John Ross. How’s their mother-son dynamic going to be moving forward?
Sue Ellen and John Ross have an interesting mother-son relationship. There’s always going to be a push and pull, but they ultimately love each other. She’s sick of him right now, but he’ll get to do some heroic things in the coming weeks that could change that. TVLINE | What about Pamela and John Ross? I imagine she’ll be a little vengeful?
She’s not happy with him, no. Actually, vengeful is a good word, because she’s going to do something bad and he’s going to get hurt. And that continues for quite a while. Think War of the Roses.

TVLINE | Since Drew is dead, is it safe to say the truth about who started the fire will never come out?
I wouldn’t necessarily say that. We want there to be a lesson in all of this, especially when it comes to her drinking.

TVLINE | Speaking of Drew, how will his death affect Nicolas, since he gave the OK to make it happen?
Well, he’s a bit of a sociopath, as we’ve seen. He did what he needed to do, and that kind of behavior will continue until Elena begins to figure things out.

TVLINE | The last time we spoke, you told me not to get too attached to Heather. What can you say about her and Christopher moving forward?
That’s still true. We’ve just got to keep it fresh. We always say, “We don’t need more beds, we need more bodies for the beds.” Elena was on a different track this season with Nicolas, so I needed something for Christopher to be happy about. There are a few more episodes with Heather, so you can still enjoy that couple.

Dallas fans, what did you think of tonight’s explosive premiere? Any hopes for the rest of Season 3? Drop ’em in the comments section below.