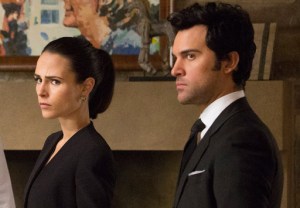 Poking holes in Elena’s diaphragm was just the beginning! When Dallas‘ third season resumes Monday (TNT, 9/8c), Nicolas sets a new plan into motion that will shift the balance of power dramatically in his favor.

Juan Pablo Di Pace tells TVLine that we’ll see Nicolas (or is it Joaquin again?) start to unravel in the coming weeks, and in his desperation, “you see how far he’s willing to go.”

TVLINE | Do you enjoy playing the villain?
Is he a villain? I don’t know, maybe he is. The interesting thing about Nicolas is that he doesn’t really have one personality; he has about five or six.

TVLINE | But this false persona he’s built up is bound to come crashing down eventually, right?
I don’t know, I think he’s like a cat. He always lands on his feet. Of course there are moments where you think, “Oh, crap, he’s going to get caught now.” In this second part of the season, you see how far he’s willing to go.

TVLINE | If I recall, the last time we saw Nicolas, he was poking holes in Elena’s diaphragm?
[Laughs] Yes, yes he was. For the writers, that was the best way to show that Nicolas wants to be tied to Elena for life. … And the second half of the season takes place in a much shorter time than the first half. I think it’s about a week or two, and all this stuff starts to happen. He knows, at some point, Elena is going to find out what he’s done, so even if she hates him, at least [a baby will keep me] in her life forever.

TVLINE | What was your reaction to that scene when you first read the script?
The diaphragm poking? Honestly, I always have at least one “WTF” moment when I read my scripts. The writers are really out there when it comes to Nicolas, and I always have a lot of fun with him.

TVLINE | And how will he continue his plans in the second half of the season? Who are his targets?
He’s scared that his plan will not work. The people that have to do with what’s happening are people that he loves — Elena is involved, Drew is involved— but he also owes a huge debt to the cartel, and he has to answer to that. There’s no not making it happen. It’s a very difficult episode for him, almost like Sophie’s Choice. It gets even more accelerated, and there’s always that feeling that something terrible is about to happen.

Dallas fans, any hopes for the second half of Season 3? Drop ’em in the comments section below.